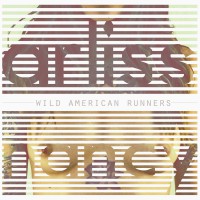 Imagery is a cool thing for music to evoke, and certain bands make me imagine certain things. Within the first few seconds of first hearing Arliss Nancy a few years ago, I immediately pictured a log cabin, roaring fire, whisky being sipped and tales of woe being shared. My kinda thing. Wild American Runners is the latest offering from AN and picks up the mantle from 2009's Simple Machines just perfectly, rolling into a new chapter with ease. Where Simple Machines made year-end lists and had a collection of great songs, one small criticism was that it possibly lacked true flow or a unifying theme to link each song. Runners has remedied that, giving the listener a true feel of what's driving these songs and what's making this band create such great music. Road weariness, lost loves and the endless searching for answers at the bottom of a bottle.

The overriding feeling I get from Arliss Nancy songs is that they mean this shit, that there is a beautiful sounding fire burning in the throat of Cory Call, complemented to the fore by Kyle "GB" Oppold to give the perfect delivery of this subject matter. The closing lines of "Troubadour" blend perfectly with the opening of "Nathaniel" to set the scene of where these guys are at right now -

"She wanted so much more than a piece of shit like me, and I cant say I blame her, I led her to believe but I've been trying so long, just to find my way back home, but my home ain't there anymore"

"My blood's been thin for too damn long, whisky and gin and old sad songs about the girls I never had and the ones ain't coming back"

It's hard to not be captivated by Call's tone or not be drawn into every scene he is painting. The twinkling keys of Chris Love and the bright, warm guitars played and produced by Jason Larson bring out the best of what these guys can do on songs like "Nothing to Show" and "Both Got Old," which rolls seamlessly into "Hold It Together," a song with a definite nod to the melody of "Boys of Summer" by Don Henley. It fits great and using small exerpts from their peers is something I have seen these guys do live also, a far more fitting tribute to influences than most can muster.

"Late at night when my 4 chord salvation came pouring through my radio dials, I sat in the dark and I smoked as we passed over miles. Fuck, I held so close the perfume of her ghost, Drawn like a moth into her flame, and I dont think im ever gonna change"

It's the heart and soul of a band completely at ease with where they are, and are more than happy to pull up some more chairs to the table and offer these tales over whatever poison you care to share with them.

Stirring title track "Wild American Runners" and "The GB Shuffle" lead the way into the closing number "Vonnegut," which not only serves as the end to this fantastic record but also sounds like its describing the end of the particular chapter of life that has just closed

- "So I sold all my shit, I'm leaving Colorado, I dont think I'll miss it anymore"

It's often at our weakest where the greatest inspiration is drawn, and Arliss Nancy draw on what has affected them most over the past year, crafting a record that will speak to the soul you may thought you had lost to woes just like these. At times beautiful, always captivating, with a spirit as strong as the booze that's probably coating their throats tonight, this is a truly great record deserving of far more attention than it may get. "Vonnegut" rounds this all of so well with Call lamenting -

"It just hurt so goddamn bad for me to be around it so I did my best to just stay somewhere else.
But when I come back around it always breaks my goddamn heart,
to see you out with your new man in the booth that we called ours,
everything was beautiful and nothing hurt"

Wild American Runners had molded AN into a force you probably won't be able to ignore for much longer, nor should you. Highly recommended.