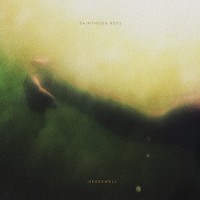 Sainthood Reps teased us earlier this year with that Weatherbox split and if you could tell from that snippet how powerful Headswell was gonna be, then I salute you. I had a feeling it would be good but this blew away all my expectations. Monoculture was the perfect foundation for them to cut their teeth on and for all their ambition, I can't see Sainthood Reps being that underrated band I felt everyone was missing out on anymore.

Musically, the band combine hard rock, post-grunge and post-rock to grand effect. It's not flawless, but it syncs perfectly with the moody vocals showcased by Francesco Montesanto. He really brings his best to the table with an immaculate grungy disposition on "Desert Song." It's arguably the most outstanding on the album but really, there are so many to choose from. Here, the angsty theme and mixed vocals throw the listener for a loop in a good way.You can feel the references to Mogwai, Fugazi and of course, Brand New, when Derrick Sherman's guitars accentuate Montesanto's tone. The guitars previously always felt a bit underdone and rough around the edges, but on Headswell Sherman's guitars bellow and hang in haunting fashion. He's an integral reason the band can dance between genres.

The broody instrumentals help create that loud, indie atmosphere with verse-chorus structures that swell at the perfect times. The melodies are more obvious on this album than ever before with Sainthood Reps, with an overt sense of panic rushing throughout most of the tracks, which is what it seems Montesanto intends – some sort of impending doom to signal a sense of disconcerting ambiance and make songs like "The Last Place I Left You" swarm the listener with grungy tension. This track is rife with musical and lyrical contours a la '90s rock with bands like Smashing Pumpkins echoing in influence. The guitars are jagged and wear out into bludgeoning choruses that highlight Montesanto's dystopian lyrics. As an architect of Monoculture, Montesanto admitted that even with so many talented key players and smart stakeholders involved, they may not have had the expertise or experience to refine their definitive sound back then, but they certainly seem to find it here.

Continuing through Headswell, "Fall" is an excellent slab of '90s-influence heavy alternative, as Sainthood Reps mix soft finishes with more hammering guitars at intervals. They swing from punishing and blistering to calmer and swooned periods before Montesanto cracks his voice with the relentless and blistering instruments backing him up once more. The title track is built on elementary percussion before being tampered with by Sherman's riffs as it swells to more moshpit grunge. Noisy and boisterous. You can feel the basement sweat and jam-packed kids looking for feelings of inspiration. There's a bit more of a punkish attitude on this track, but Montesanto's candor eliminates any disconnection to the listener.

Sainthood Reps do aim for a bit of variation with the lighter "Quitter," which sounds like a harder Weatherbox, and the odd acoustic closer in "Breath Worth Breathing." They aren't bad at all, but they're nowhere as good as the meat of Headswell. These raging, head-banging jams are what Sainthood Reps wanted to bring out and smash windows with. Well, given that this is the best work they've ever done, looks like it's mission accomplished.