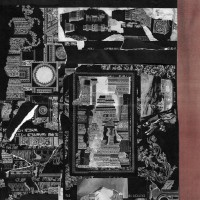 Many of Hausu's elements should be pretty familiar to listeners. But the Portland, OR, band combine them in such a way on their full-length debut, Total, that's remarkably distinct, and it results in a striking, occasionally enchanting LP.

For starters, vocalist/guitarist Ben Friars Funkhouser nods rather directly to Robert Smith with a lowly, pained quaver of sorts. But it's set against those sort of roughshod, '90s-era indie/punk borderlines with incredibly tasteful, lower-fidelity layering, like a greater wall-of-sound bridge to connect the early blueprints drafted by Pavement and those being currently popularized by, say, Tigers Jaw.

Funkhouser does have that slacker tone, but he has some sort of range too. He strains earnestly through aggressive fits on tracks like "Leaning Mess," "Tetsuo" and standout "1991-2091," the latter of which picks up on the gravelly scream/pensive murmur juxtaposition adopted so well by so many post-Fugazi acts. The tension and spastic-but-sort-of-controlled-intensity on "1991-2091" makes for a pleasantly jarring cut in Total's entire context, so when it leads into the album's most vulnerable and heartbroken moment on "Gardenia," the pair of songs pack a nicely hard/soft wallop. Hausu's inspirations are most cut-and-dry on "Gardenia," which nonetheless finds them totally hitting their stride in both verse and chorus. When you hear the phrase "earworm melodies," this sort of stuff is probably what it's referring to, even if its chorus reads like fan service to the 18-24 demo: "I don't wanna talk about it anymore. / I just wanna feel like I'm living again. / I just wanna move back home / and see my parents and cats." Can you see these lyrics laid out over a picture of a college kid sprawled out on a bed getting reblogged hard on Tumblr? Me too, but it doesn't matter, because "Gardenia" is pretty fucking dynamite.

It sounds like Total really struggles some to match the dynamic, engrossing qualities of its opening salvo, but it doesn't blow all its steam early. The band make their money from there on out on meandering, and they do it fairly well (think a stuffier Television), with at least three more songs pushing or surpassing the five-minute mark thanks to straight jamming (the post-punk-ca.-"Shadowplay"-hinting "Vasari Joust"), fuzzy beats, or extra snarling ("Tetsuo"). The nimble, dusty twinkles that initiate closer "Bleak" will likely grab anyone whose attention has faded; it's a pick-me-up just as things are ending, with plenty of head-bobbing, air guitar-worthy riffing, a gripping, rhythmic push, and the band lending a slightly cleaner tone to the bridge's atmosphere that really makes it.

Total's a very good and nearly outright great record you could essentially call art-punk, a tapestry of warm influences whose details really shine at certain times.