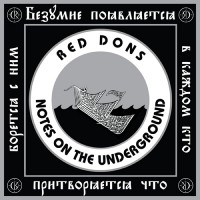 I need to make a statement before continuing with this review of the latest release from The Red Dons: I am a doofus.

Why, you might ask, am I being harsh on myself? Well, it's because I've ignored Red Dons for far too long and am mystified by my oversight given that the band is like a mixture of the Marked Men and the Steve Adamyk Band, a combination that means Red Dons are likely to be better than many bands you have heard or are likely to hear. Oh yes, they're that good, and this 7-inch contains three tracks of some of the most glorious power-pop-punk you are likely to hear for some time to come.

What makes the Red Dons so good? Well, great songs and a great sound are a strong start for any band and that's clearly evident on these three tracks. There is a self-assurance inherent in them, which allows the band to take their time and not rush into anything. "Cold Hearted" is a triumph of songwriting, as it slowly builds with an intro that is over a minute and a half long – reminding me of the Arctic Flowers – with edgy guitars and a brooding, tight bass and drum combo. When the vocals kick in, the song steps up a few gears and there's another three minutes or so of sheer quality based around an eminently catchy tune.

Where "Cold Hearted" has a long, slow burning fuse, "Losing Track" takes less time to kick into gear and is a much more upbeat and immediate song, although "Dead Ender" tramples down the door from the off, overturning tables, chairs and anything in its way as it races along at a fair clip to deliver more attention-grabbing moments. I can't help but think of the Dickies' Leonard Graves Phillips when listening to all three songs, given the occasional strong similarities that Douglas Burns' vocals have to those of one of the most distinctive singers in punk rock, and let's be fair, that's not a bad thing to have in your arsenal. There is something untouchable about this release, as it's got the perfect combination in terms of sound, songs and delivery.

Listening to these songs is effortless and hugely enjoyable which in my book form part of why this band is so marvellous. So, don't be a doofus, leave that to me; snap this up like an alligator taking down its prey; devour it totally and luxuriate in the pleasure that this record offers up and while doing so, feel blessed that you are not like me. The fact is I do actually have a copy of the band's Fake Meets Failure but I've not really got round to listening to it but there's no doubt that I'm heading in that direction once I've finished typing.

Pentimento: Inside The Sea [EP]