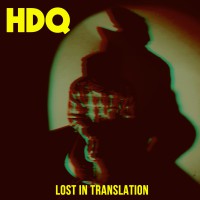 For those who might be unaware of the fact, HDQ ended up providing 75% of Leatherface so that alone should get your attention if you had previously not encountered this then four-piece from the northeast of England. HDQ were one of the first UK bands to really take on the influence of American bands that were adding melody to a hardcore style of punk without attempting to keep up with the speedier bands, and they managed to do this successfully over a period of years, frequently touring the UK and Europe. This extensive touring and the fact that HDQ and the Abs (a band from my hometown of Newport) did a fair bit of this together allowed me to see the group quite a few times and the live shows were always entertaining given the energy that the shows created.

Here we are again, and 23 years have passed since the band's last studio album, and as with any band making such a comeback, one does wonder if it will work out for the best or if the band has just lost what they once had, thus souring the nostalgic pleasure gained from the memories. On first listen, Lost In Translation shows a band that has kept pace with the times whilst retaining the qualities that were evident in their original form. For me, HDQ was always about the distinctive guitar sound of Dickie Hammond and the impassioned vocals of David Golledge (Golly), and that doesn't change here, even if Golledge's voice, as is to be expected, has altered a bit in the intervening years yet without suffering any loss of its appeal.

It does seem as if the progression that HDQ were showing back in their original incarnation has been continued on this record, with brief hints towards Americana, a genre that has become popular to many of a punk background. That progression originally led the band to an even more emotional sound on 1990's Soul Finder and that continues here, with the songs never relying on an overly frantic delivery to make an impact â it's all down to the actual content with song structure clearly being an important feature.

The album opens with four songs that are classic HDQ, beginning with the title track through to "No One Wants To Lose A Friend." Then things change somewhat, as they are followed by a track that at times brings to mind the Black Album era of the Damned. "My 3 Reasons" has a quality of sound which seems thicker at the low end, whilst Golledge's vocals takes on a touch of Dave Vanian-style crooning. The odd thing is that it's also on this track that I get the intermittent nod towards Americana, more through the vocals, so it's quite a variation that's heard but it works extremely well.

Up next is the recent single, "Hands Me Down," the strongest track on the album and one that revisits the trademark sound HDQ whilst not coming across as dated or a pure nostalgia trip. This is the track that displays how emotional punk rock can be delivered without there being any sense of overdoing any poignancy surrounding the lyrical content which has a definite personal feel (as it does throughout the album).

Songs like "Dig In Deep" – which on top of the usual signature guitar work, is accompanied by an extremely strong input from the rhythm section (and at times the song does bring to mind Doctor Bison, a combo formed by members of The Abs and Dickie Hammond), is another standout. "Wake Up Call" (perhaps the track closest to the band's early sound) and "Dislocated" continue the quality of material on this album ensuring that it's a formidable return for HDQ.

The CD version also contains the B-side, "Toronto," of the recent single and that's a worthy addition indeed, especially if you've not been able to get hold of the vinyl version of the 7-inch.

Thinking of HDQ has always caused me to look back on positive memories, so it's extremely pleasing to have the band back together and there is no doubt that Lost in Translation is the perfect comeback. If you liked the band before, there's nothing not to like here, and if you haven't heard them, then this is worth a go if you like melodic punk rock and especially Leatherface.

Various: The Songs of Tony Sly: A Tribute