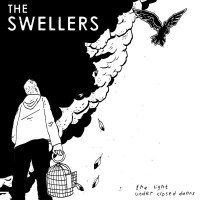 "Should" should be a metaphor for the Swellers' career. The opener to the band's newest LP, The Light Under Closed Doors, "Should" starts off with vocalist/guitarist Nick Diener singing a simple, understated melody, but as the track moves along, it builds to a more compelling framework with pounding chorus transitions and guitars driving it at a steady mid-tempo.

But as most fans of the Flint, MI, punk band are aware, the Swellers haven't had quite the trajectory one might expect from a band so cleanly melding the influences of the EpiFat heyday and crowd-pleasing '90s alt-rock. It's not for lack of quality, as The Light Under Closed Doors shows: The material between has been plenty solid, but their full-length debut for No Sleep is their strongest effort since 2009's high watermark, Ups and Downsizing.

While the Swellers never necessarily wrote songs that dragged, either (witness 2011's four-minute fan-favorite "The Best I Ever Had"), The Light Under Closed Doors is noticeably compact. Its 10 tracks top out at just under a half-hour, making for their shortest LP since their first, 2004's blacklisted End of Discussion, and their comparative terseness works to the album's advantage. The Dieners took turns writing from each other's real-life situation (one in engagement, the other a fresh bachelor), and while their tropes don't seem out of the ordinary for them (introspection; disappointment; interpersonal relationships; homebase geographic references as metaphors), their diction, the dual perspectives and overall presentation feel fresh enough to carry the album well.

Musically, the Swellers don't overhaul their M.O. The album's a little devoid of the skatepunk-addled double-time the band have always been so adept at (save the refreshing "Becoming Self-Aware"), but the soaring hooks ("Great Lakes State" and, again, "Becoming Self-Aware") and pulsing beats are here in spades. Weezer have always been a pretty prevalent inspiration, with their Pinkerton-era guitar tone especially evident on cuts like "Got Social", "High/Low" and "Friends Again (We Can't Be)", while the fantastic "Designated Driver" is the heaviest song they've written, a sort of 2010s update to Alkaline Trio's "Private Eye".

As much as they've continued to provide highlights over their last few releases, the Swellers' latest feels more complete and compelling than they've sounded in some time. A metaphor for the potential that's always lied behind seemingly finished opportunities, one can only hope that The Light Under Closed Doors possibly sheds more on them.

Various: The Songs of Tony Sly: A Tribute