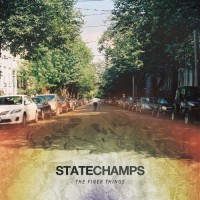 State Champs showed with the Overslept 7-inch last year that they were a step ahead of the pop-punk game. It left an impression that they were ready to kick it up a notch and transform into something bigger. The Finer Things explores this promise and while glossing over some of their strong points, the magnitude of what it could have been leaves something to be desired. They had a pop-punk grit and an edgier take on their 2012 release but The Finer Things just falls short of the potential that State Champs should be exploiting by now.

"Critical" and "Remedy" are straight off the aforementioned 7-inch and are the banner tracks of the album. They expose the crevasses of aggression, thumping basslines and catchy vibe of the Albany, NY band. If only there were more of these on the record. These songs represent an anthemic cadence which tow the lines of old, old, old-school Fall Out Boy and are no doubt, the flashes of brilliance which vocalist Derek DiScanio holds as trump cards. His patented pop-punk voice is clean and a tad generic, but ideal to what State Champs propose musically. "Over The Line" reiterates everything mentioned in this paragraph and balances the pop-punk while ramping up the band's pacing. It borders directly in-between pop and punk and never switches alliance to either.

But too many of the tracks on The Finer Things give a lukewarm feeling, that there isn't a full capitalization on what State Champs were seeking to compound - a more dynamic, fluid pop-punk strain of music, on a consistent basis. The opening salvo of "Elevated" and "Deadly Conversation" struggle to hold interest and it's left to "Hard To Struggle" to break the monotony. It's a stiff opening that's kind of hard to get over. Apart from those standout songs above, the chord progressions seem somewhat elementary, in a manner where simplicity doesn't work well given the band's flexibility, noted from previous albums. They do manage to throw in distorted-echo vocals in a couple songs here and there but by then, the scope of the record's a bit diminished.

State Champs do have a great vision. Are they executing it? Not fully. Maybe if they hone their craft a bit tighter and swifter, they could pull it off. But right now, it seems that they're still seeking a definitive sound. They need to find that distinct sound if they're gonna move forward and kick it into the next gear.