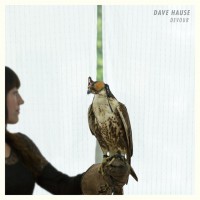 At this point, no one should blame punk fans for growing weary of the "acoustic guy" movement. As Chuck Ragan, Tim Barry, Dave Hause and countless others have (mostly) traded in their electric guitars for acoustic guitars over the past decade – ushering in a bevy of like-minded frontmen along with them – it's become increasingly difficult for its players to separate themselves from the oversaturation of contemporaries. Hause seems keenly cognizant of this, and makes a concerted effort to differentiate his sound from the others on his sophomore full-length Devour.

Devour sounds much fuller and more realized than its predecessor, Resolutions. And much like on Resolutions, the full-band feel, somewhat unique to this genre, works to Hause's advantage. Opener "Damascus" wouldn't sound out of place next to the more rustic moments on the Loved Ones' Build & Burn; with shuffling percussion, intervaled electric guitars, haunting backups and intense vocal melodies from Hause, it's a standout that possesses the same sort of Springsteen-informed, working-class feel that dominated the Loved Ones' latter work.

That aforementioned vibe permeates throughout Devour: The driving piano, soaring vocals and lyrical content of "The Great Depression" and "We Could Be Kings" are straight out of The Boss' early playbook; the latter in particular is one of the catchier songs Hause has penned.

The perspective of "Autism Vaccine Blues" is unique; Hause recently told Esquire, "The song is written from the perspective of someone who has been recently cured of autism and isn't so sure they are ready and willing to cope with all that we have to offer here in modern society. I'm not so sure I am either." The song itself is lyrically very compelling and awfully catchy, as Hause no doubt injects some of his own issues and worries into the perspective of this character he's created.

Because of the fuller approach, the quieter, more rootsy moments of Devour are augmented. "Same Disease" uses lush acoustic guitars, booming low-end percussion and wordy, energetic vocals from Hause. "Bricks" is a little slower and dramatic, but no less effective as it eventually evolves into a louder, heavier number.

Elsewhere, "Father and Son" has some neat distorted guitar residing somewhere between bluesy and fuzzy; the dark austerity of "Becoming Secular" works to its advantage; and "Benediction" closes Devour on a slowly building, eventually triumphant note. The problem is getting there: This album is 48 minutes long, and Hause musically repeats himself just a little more than is necessary. Still, Devour has more than enough quality moments to elevate Hause toward the top of the genre.

Maps For Travelers: Change Your Name