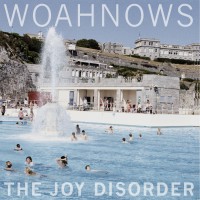 Since 2012's debut EP Foma from Plymouth trio Whoahnows, vocalist and guitarist Tim Rowing-Parker has called time on his bass playing duties in Crazy Arm to focus more closely on what originally appeared to be a bit of a side project.

Foma, which is found in its entirety on the B-side of this 12-inch, was full of jaunty, edgy indie/punk with moments that were akin to Ted Leo and the Pharmacists. With The Joy Disorder and its five new tracks, an additional focus appears, with hints of maturity in both songs and sound in contrast to a more youthfully exuberant quality that was felt throughout its predecessor. Another factor that has probably helped in this growth is that Woahnows have been playing more gigs, allowing them to fine tune their trade with the results noticeably being heard.

"Low Machs" wastes no time in showing off the progression made by Woahnows – the catchiness remains but the sound is bigger, more anthemic from the off and displays more of a post-punk quality in which Tim Rowing-Parker's vocals provide the topping to a quality track.

"Grey Matters" begins in a fashion that keeps that Ted Leo comparison, but also reaches some Minutemen/Firehose moments within its structure. This is a more restrained track than "Low Machs," but "Painfully Safe" brings back a bit of that anthemic punch and throws in some enjoyable a cappella group vocals to aid another strong track.

"Karuna" (the Sanskrit word for âcompassion') slows things back down, and it took me a few plays to get into this song – at times, it has a trance-like quality that highlights how Woahnows are keen to not get stuck in a rut by producing identical songs.

The title track kicks away any reverie that "Karuna" might have induced, as Adam Wherly's drum roll and Dan James' thick bass come steaming into play, to be met by Rowing-Parker's guitar and vocals adding the focal point for another example of the lack of conformity in the bands songwriting. However, the song ends a bit prematurely for me and I need to head back to play it again, as at just under two and a half minutes, I feel it wouldn't lose any impact with a bit more time added to it.

Overall, The Joy Disorder marks a step forward for a band that I'd already taken to heart and which seems to diminish that acquaintance. As a piece of work the five tracks flow nicely into each other, even with the jump from "Karuna" to "The Joy Disorder" being a noticeable change. For a trio, they deliver quite a big sound, and here's a band where the sing-along moments are eagerly awaited at gigs, and met with raised glasses and hoarse voices in accompaniment. I have to say though, and this is in no way meant to heap pressure on the band, but I think the Woahnows have yet to reach their peak.

The Wonder Years: The Greatest Generation