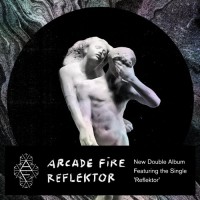 Grammy success seems to have pushed Arcade Fire to new levels. Reflektor, their first album since mega smash The Suburbs, manages to be both more and less mainstream simply by being a double album. The band's promotional campaign, in which they've renamed themselves "The Reflektors," has generally sold Reflektor as a dance album, and while that's true to an extent, there's a little more going on. Splitting the 75-minute record into two discs makes for easier digestion.

Getting tagged with the "next U2" label is a blessing (they mean what they say!) and a curse (they come off like wieners for doing so!). While that description still applies to the ever earnest Arcade Fire, on Reflektor's first disc, they sound aesthetically more in keeping with mid-period Talking Heads, with producer/LCD Soundsystem James Murphy acting as their Brian Eno. Dub noise and world music beats bubble under the electronic grooves. If it weren't for the lengthy running times, a Berlin-era Bowie comparison might be valid too (and seeing as he appears on the title track, not totally surprising).

Lyrically, Reflektor is very much in keeping with frontman Win Butler's wheelhouse. He covers how technology brings people together by isolating them ("Reflektor," "Flashbulb Eyes"). He questions what's normal on "Normal Person," a song that's a little too on the nose but so dang rocking that we should all just go with it. He writes happy songs with sad stories.

Running through seven tracks in 36 minutes, the first disc would have made for a concise follow-up to the hour-plus Suburbs. And because of the packaging, it's easy to do just that. If you've watched Arcade Fire's numerous television appearances leading up to Reflektor's release (including their awesomely odd late night special), it's no coincidence that most of the material performed came from the first half. These are the hits.

Which puts the second disc in a tough also-ran position. If disc one is a concise stand-alone, disc two plays out like B-sides and scraps. There's little of the rising/falling dynamic heard earlier. While it's got some good tunes ("Here's Comes the Night Time II," "It's Never Over (Hey Orpheus)"), there's also plenty of bloat despite only being a couple minutes longer than the first disc. "Night Time II" opens with a limp intro. About half of the 11-minute closing track "Supersymmetry" consists of white noise. When the earlier songs run over five minutes, it's because they're jamming out. When the later songs do the same, it feels like they just didn't have an editor.

Not to get all "music is better on vinyl," but by replicating the physical act of switching LPs (erâ¦CDsâ¦), Arcade Fire managed to satisfy divergent interests. Disc one is the hits. Disc two is the weird stuff. You can't call Reflektor self-indulgent when it goes out of its way to please you. Which is secretly what makes Arcade Fire the "next U2." For all their arty inclinations, they still know how to please the whole crowd.