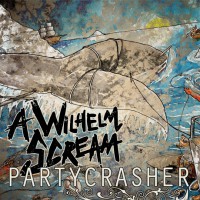 Partycrasher is A Wilhelm Scream's first full-length since 2007's Career Suicide, a wide layoff by just about any measurement, but one that feels especially canyon-like given what's changed between now and then: six years ago, there weren't a billion bands of questionable accord jockeying for attention from increasingly capricious music fans. Record royalties and listener attention spans weren't quite shrinking in concert with one another yet. Things were different and simpler then, and this band's sound continues to serve as a reminder of that.

Positive vibes abound, though. Add the reverence, recognition and pure "wow" factor of No Idea releasing Partycrasher – When was the last time No Idea had a band this high-profile on their roster? Most bands either peak on No Idea or become big after leaving the label – and it's hard to not get excited about the whole thing.

Not only that, but the most important fact about the aforementioned layoff is that it wasn't really a layoff: A Wilhelm Scream didn't actually go anywhere; they released a solid, self-titled EP in 2009 and have more or less toured regularly throughout the late 2000s and early 2010s. Maybe AWS are outliers, or maybe that's proof that in this era of the music industry, a band doesn't need to consistently crap out a new collection of songs every two years to remain relevant. Maybe taking their time and ensuring everything is as perfect as it can be is a good strategy for a band to have. Who knew?

As is expected, Partycrasher feels complete and calculated. The unpredictability and virtuosity from A Wilhelm Scream's other work remain, but those elements are layered with a palpable exuberance that seems like a byproduct of the "layoff." The dizzying riffs of opener "Boat Builders" and follow-up "The Last Laugh" rocket through the speakers. It's immediately apparent that after the often captivating tone and tempo experimentation on Ruiner and Career Suicide, AWS have broken down their sound to its bare components on this album, and then augmented them for maximum impact.

Nuno Pereira's vocals have never sounded better; his voice is much higher in the mix on Partycrasher than on past albums, which makes his gritty howl that much more effective. He seamlessly navigates around the world-class band behind him on "Gut Sick Companion" while drummer Nicholas Pasquale Angelini's fills create calculated chaos with the joyful riffing of guitarists Mike Supina and Trevor Reilly and the rapid-fire bass playing of Brian Robinson. Same for "Ice Man Left a Trail" and "Sassaquin" with their mesmerizing harmonics from Supina and Reilly. He even impressively elevates on "Wild Turkey," a song that impressively maintains its tempo through multiple fills from Angelini.

Partycrasher isn't a comeback record or a return to form. If anything, it's a loud affirmation that A Wilhelm Scream are still one of the most creatively engaging and thoroughly fun and exciting bands in punk. The kings are alive and well.

The Stargazer Lilies: We Are the Dreamers