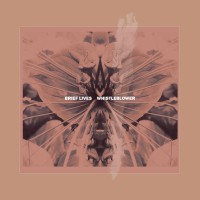 Post-hardcore outfit Brief Lives seem to harbor a deep love of '90s outfits like Quicksand and Jawbox, if their latest 7-inch Whistleblower is any indication. Only two songs are up for discussion here, but the worship is clear: Brief Lives favor snarling yet twisting guitar lines, forceful yet clear vocals, and a songwriting approach that's heavy yet melodic. It's a short, perhaps derivative listen.

Whistleblower kicks off with its title track, clocking in just shy of four minutes. The guitars have a For Your Own Special Sweetheart vibe, but the vocals come close to "hunger dunger dang" grunge self-parody. That's not enough to sink the song, but it does reveal a band still finding its creative footing. Still, "Whistleblower" has a nice, retro rocking sensibility.

"No Voice" does the same trick in less time. It's also less melodic ("Whistleblower" has this interesting bridge that dials down the energy in favor of an almost choral arrangement before a final rocking outro). The song rocks for sure, but again, the vocals hold it back. "No Voice" is searching for pyrotechnics, but it stops short of truly losing control.

The 7-inch is competently played, and at least Brief Lives come with strong references. But as is, this band still come short of matching their idols' legacies.

The Stargazer Lilies: We Are the Dreamers