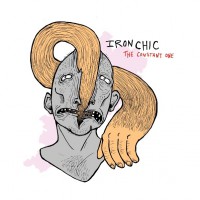 Chances are, unless you live in a reality where progress is calculated against the most insignificant of measures and prudent foresight does not exist, you've probably experienced the disparaging effects of a soul discontent. Don't get me wrong â I take pride in accomplishing menial tasks, such as getting to work on time, or biting my tongue when arrogant prick assholes make arrogant prick comments. You know, the small shit we're all trained to endure and passively ignore (or accept). What I'm referring to is life's dark matter: the goals, dreams and passions that inspire us to get up in the morning. Consequently, it's often those same intangibles that wake me up in the middle of the night trembling in a pool of cold sweat. Or would, if it weren't for the copious amount of alcohol preventing consciousness, and, inadvertently, my midnight mental meltdown.

Iron Chic know something about meltdowns. Since 2008, they've been singing the songs of our insipid, derivative existential crises: mid-tempo, melodic and full of enough whoa-ohs and sing-alongs you'd swear emotional instability was cause for celebration. Their music is a jaunting exercise that either leaves you feeling totally rested, or completely restless. For the casual punk, Iron Chic's music is another opportunity to lose yourself in a crowd of friends and strangers as they toss you around a room, everyone screaming at the top of their lungs as the climax erupts and descends. At that moment, you think, everything in the world is right. But after the basement empties, and the beer runs dry, and all your friends go home, where does that leave you? Alone, in your room, hiding from masochistic thoughts, forced to confront your present reality, and try to reconcile with the one you wish it to be. And that, my friend, is some scary shit.

On The Constant One, the sophomore follow-up to Not Like This, Iron Chic continue to craft catchy, indie-inspired, emotive punk contrived to relieve, or at least alleviate, the pressure applied by our contemptuous minds. The musical framework is left largely unchanged from their past work, much to their conceit. Guitars play high-end distorted pop while drums focus on channeling energy from individual to group, typically achieved with a fair amount of sing-alongs and emotional build. Similar to their other output, The Constant One maintains a certain level of continuity by transitioning songs one after another through the use of guitar feedback, ostensibly unrelated audio samples, and, in one instance, 8-bit. This laissez-faire approach is effective because it doesn't detract from Iron Chic's art: the message in the medium. Addressing themes as diverse and interconnected as temporality, friendship, perseverance and community in a familiar context allow for therapeutic reexamination of how these ideas operate within our own lives. In a sense, it's like having a therapist on call for those requisite sessions conflagrating whatever demons â past, present or future â are haunting you now.

Front man Jason Lubrano's lyrics speak to the human condition. With a gruff, effortless delivery, his words encapsulate the totality of an experience without relying on citing people or events directly, ultimately instilling a ubiquitous quality that doesn't placate vague interpretations. On the candid, though self-conscious, "Wolf Dix Rd," Lubrano admits some pieces of his life are missing ("I'm going to think real hard about what I'm going to say/ I couldn't really stand you thinking any less of me"), but irreverently rejects the supposition that he can't still put it all together ("What was the question? I don't know/ I wasn't paying attention/ You say I'm lacking direction/ I'm going to find out on my own"). Even when doubt and uncertainty manifest internally, as in the slow burning "(Castle) Numbskull" (one of two songs featuring vocals by RVIVR's Erica Freas), Lubrano employs the same tenacious attitude; "Now look how it fucking stings/ it only hurts when I laugh/ and I do what I can until it tears me in half."

But Iron Chic aren't simply meditating on the daily struggles we confront and attempt, often unsuccessfully, to mitigate. Rather, they're offering working knowledge on how to manage these episodes. By conveying a perverse sense of resignation, The Constant One makes otherwise crippling realizations, and their remedies, palatable. "Things get weird. Just have to deal with it," Lubrano concedes on "Sounds Like A Pretty Brutal Murder," before advancing his antidote: "Unwind/ get high/ say âfuck the world' and we're done with that/ Maybe then we can relax." He isn't suggesting instrumental apathy; he's prescribing metaphysical liberation. And if that isn't enough, Lubrano turns phrases with untritely authority, asserting life lessons with the resounding wisdom of a Buddhist monk, not an aging punk. On temporality: "If I know one thing it's how to waste my time/ And if you taught me anything, it's not to waste my life" ("True Miserable Experience"). On perseverance: "Keep getting nowhere/ over and over/ I know when I get there/ I'll be another day older/ Maybe get a bit closer/ this time" ("Don't Drive Angry").

Despite the litany of causal advice, a singular message echoes throughout: you are not alone. The Constant One, as a sentiment, is a statement on the cyclical nature of our humanity; as a commentary, it attempts to diffuse the fears and anxieties, the failures and disappointments that perpetually threaten to debilitate us. And the conclusion: it's all bullshit. The human condition is greater than the sum of its experiences. As Lubrano reminds us, "We're here alive/ there's still time to fuck up now." I don't know a more life affirming, reckless and comforting disposition.