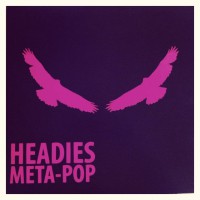 Coming on like a mix between the Ramones, Bomb the Music Industry! and Plow United, Delaware's the Headies specialize in a fine blend of manic, electronic-tinged pop-punk. Sometimes they're kidding, sometimes they're not, sometimes they reference Saved By the Bell because anarchy. Released digitally last year, the band's mighty fine Meta-Pop received a vinyl reissue this year via Creep Records, Square of Opposition Records, Start Something, My Parents Records and probably like 20 more labels.

Meta-Pop is all about duality, sort of. Some of the tunes are short flashes ("Good Morning Miss Bliss," "Anna Lee"); some are more fleshed out, by which I mean they exceed 90 seconds in length. Some songs are jokingly nihilistic, like when the band sings "I wanna fuck myself up bad and I want it to hurt / I wrote it on my shirt" on "Please Kill Me." Others actually do go dark, like when "Cold Free Air" deals with getting away with murderous murder. It's all pretty dang punk.

But the Headies don't just write flippant tunes, they also pack in the hooks. "Kelly Wears Keds" is full of Dee Dee Ramone-esque touches, from the druggy lamentations to the underappreciated girlfriends, and that's pretty cool. They also throw in some decent covers from bands ranging from Springsteen influence Gary U.S. Bonds to power poppers the Finders. Strangely, their punky enthusiasm is a good fit for these older tracks.

The Headies have a handful of Delaware/Pennsylvania shows left in 2013, including an opening slot for Off With Their Heads and Morning Glory in Philadelphia Dec. 11.