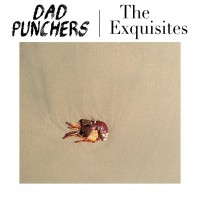 At just under 12 minutes, this split from Dad Punchers and the Exquisites offers a great tease of each band for newcomers, but also signals the direction both bands are heading, which differs slightly from what you'd probably associate with them if you're familiar with their older material. Overall, it's an EP that slips sweetly into your ears.

Dad Punchers is the side project from Touche Amore drummer Elliot Babin. With Alex Estrada recording and Rich Rossi mixing, Babin toys and fiddles with faster tempos that aren't as poppy as his earlier stuff. With influences of post-rock, shoegaze and post-punk thrown in the mix, Babin carves out a charming, catchy pair of indie tunes that come off more grasping and deeply personal than the These Times Weren't Made For You 7-inch earlier this year. Babin plays all the instruments here and as much as Dad Punchers' old stuff drew slight influence from Beach Boys and Weakerthans, the experimentation comes to the forefront here with "But The Damn Thing Has Watched Us This Whole Time," highlighting his calm, strained voice perfectly. With a stomping bass line adding a subtle emotive glow to the song, the dreamy guitars strum with a nicely poppy, anthemic structure while maintaining a warm melody between bridges. The mid-tempo feel improves a lot of what Dad Punchers usually sound like.

"Your Haircut Man" is a faster beach-rock spin on things that sounds like a summer anthem, with its indelible charm and cracking vocals by Babin, which show that while he misses notes, he does more than enough to convey his musical vision. The song cascades into Babin yelling about the struggles of adulthood and sex, with the crescendo at the end attaching itself powerfully with his wails that aren't as harsh or as strenuous as you may expect from a Jeremy Bolm associate. Babin's tracks are a more relaxed look into the visceral bubble of his life.

Switching to the Exquisites and, well, after their self-titled this year, they decide to shake things up a bit with a less alternative sound and a more indie, rough-cut couple of jams. Jason Clackley adds more weight to this with his grainy vocals on "Setting Sun," matching the distorted guitars that heighten as the song progresses. "Walk Around" stamps itself as a tad harder than usual, but it's still neatly arranged. It's a different spinoff from their sound established earlier this year, as they add more distortion to build an even bigger garage sound as opposed to an expected polished alternative take. The daunting guitars and hazy riffs at the end come off more Britpop than anything else, but it's hard to argue how well it works.

Four tracks in. No time wasted. Both bands get to the good stuff and fast. One of those short bursts of music that you won't regret. There's a lot of experimentation on tap and the varying sounds shed ample light on the past, present and future of the two bands.