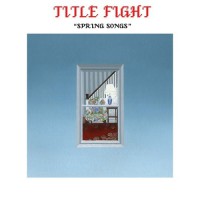 Although their sound has grown less energetic, more dissonant and just weirder with each release, with Spring Songs it's evident that the 7-inch format suits Title Fight as well as it does any traditional hardcore band. Whether that's due to the format's inherent curtness, the band's increasing repetitiveness or some combination of the two is unclear, but these four songs skirt by with a few standout moments among a lot of well-worn ideas.

The fractured disposition and ornate rawness with which Title Fight compose and play their music had already devolved from a surprisingly compelling asset on Shed to something of a crutch on Floral Green, the latter of which had its moments – "Secret Society" is still a jam – but seemed to be zapped of energy through slower, uglier musicianship that, while deliberate, wasn't interesting enough to warrant its near-constant inclusion. Conversely, Spring Songs immediately sounds thicker, heavier and more urgent, with Ned Russin's bass playing a much larger role on "Blush" and his throaty yell sounding strong. It's about as pure a distillation of Title Fight's sound as fans can hope for, even if it has a certain been-there-done-that feel to it.

"Be a Toy," fronted by Jamie Rhoden, injects some welcome melody and an unexpected cleanness to the band's sound. It's still undisputedly Title Fight, but unlike a lot of their other material, it doesn't seem intent on beating listeners over the head with jaggedness. Rhoden's monotone vocal delivery is a nice complement, both to the layers of guitars on this song and to Russin's desperate cries on the songs he fronts.

On side B, the slowed tempo and openness of "Receiving Line" doesn't evolve into anything interesting, unless it's meant as a four-minute slow-build for closer "Hypnotize," a song featuring some strong guitar interplay from Rhoden and Shane Moran and a bevy of mood and tempo changes throughout its 2:26 running time without ever feeling too busy.

While Spring Songs is more of what Title Fight fans expect and love from the band, it's also a lot more of the same. While it was clear the band had something more interesting and perhaps thoughtful to say than their contemporaries on Shed, with Floral Green and now Spring Songs it seems as if they're running short on ideas.