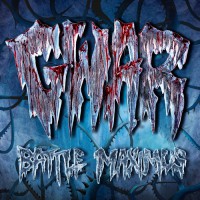 Battle Maximus follows a major loss by GWAR, but ends up being a major victory for the band. Following 2010's Bloody Pit of Horror, guitarist Flattus Maximus fled the band and took to the stars. Meanwhile, newest slave Cory Smoot, who is credited with energizing the band via 2004's War Party following a creative slump, suddenly passed away due to a genetic heart defect. Battle Maximus is their first release with new guitarist Pustulus Maximus (and slave Brent Purgason supporting the axe-wielder) and instead of licking their wounds, the band charge forward and deliver an album that goes in a different direction than past efforts, but is still classically GWAR.

The band open "Madness at the Core of Time" with a ripping solo by Pustulus, announcing his position in the band. Pustulus is significantly different than his predecessor. While both guitarists were firmly rooted in speed thrash, Pusutlus is dirty and heavy where Flattus was precise and sharp. He result is that Battle Maximus is GWAR's thickest album to date, constantly storinging forward like modern thrash luminaries High on Fire.

Meanwhile, as with many of the classic GWAR songs like "Horror of Yig" or "Gor-Gor" many tunes here have multiple movements, making the album raw but complex. "Bloodbath" finds vocalist Oderus Urungus screaming battle cries at one point, and at another, performing almost a soliloquy to himself about his own mental health, and at another, chanting "I saw a dead body on the side of the road" and sounding like Peter Steele in the process. Vocally, he's in top form–at one point growling, at another singing in a Viking mead hall intonation, and at another, sounding like Conan the Barbarian dispatching advice on war. Oderus took the loss of his friend hard, but here, as he battles creatures from the future who are trying to destroy GWAR, it sounds like he's having a blast.

The concept of the album is that "Mr. Perfect" comes from the future to challenge the band. Over-conceptualization can kill any album, and thankfully here, the story just provides a backdrop for the music. If you really parse the lyrics, there is a story there, but for the most part, it sounds like GWAR are just having fun killing things and doing drugs. The concept of GWAR as a mirror for the human condition works so well in that the band can do whatever, and their interactions become great fodder for a commentary on ourselves. So it is here. As the band get high, get angry, defeat themselves, and mourns like when Oderus calls out "We live from day to day!" on "Nothing Left Alive" the beasts seem surprisingly human despite their interstellar origins.

The album closes with "Gonna Fly Now" as a tribute to both Flattus and Cory Smoot. Oderus barks, "He was a brother to me, Fly now Flattus, Flattus be Free." While the healing process of losing a loved one never truly ends, it seems that the grieving process may be complete with the band's acceptance. Somehow, by acknowledging that even these horrid beasts lament death, despite the trillions that they have killed over their billion year existence, the band make their motivations somewhat more clear, between the piles of corpses and syringes they leave behind.