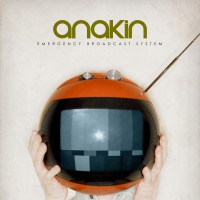 The most impressive aspect of Anakin's Emergency Broadcast System EP is how easy the band make it sound, but maybe it shouldn't be a surprise. With current and former members of the Casket Lottery, Coalesce and Hopesfall among their ranks depending on the incarnation (studio or live), Anakin use their experience as an advantage, but not a crutch. While it'd be easy for these guys to just start another hardcore band like Coalesce, or another airy post-hardcore band like the Casket Lottery, instead they've used those chops to help inform a thick, spaced-out, effortlessly catchy collection of rock songs with nods to the usual suspects of the genre, along with some unique flashes as well.

As one might surmise, Anakin's songs and overall aesthetic are wrought with space imagery, with clean, subtly programmed vocals amidst heavy, crunchy guitars, deliberate percussion and ample, Rentals-esque synthesizers. "Descend To Ascend," with its effortless chorus and soaring melodies, is straight from the Failure playbook; the more somber tone of "Heliocentric" and "Mission: Moon," anchored by Brent Windler's somewhat monotone, multi-layered vocals and a slower pace, is reminiscent of the best moments from Statistics' Often Lie, evoking an impactful, expansive, yet effortlessly laid-back feeling.

That feeling continues with "Automatic," which features the catchiest chorus of the five songs on Emergency Broadcast System, and closer "Upside Down" which relies on the synth to infectiously drive the melody.

Anakin cover a lot of well-trodden territory on Emergency Broadcast System, but it's so well done that given the dearth of talented contemporary bands in this genre, it feels pretty new and exciting.