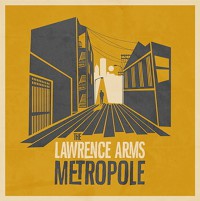 Here's an obvious statement: The Lawrence Arms are a tentpole band in this little section of the punk scene. If you're reading this, chances are good you either have a Lawrence Arms tattoo, have considered getting one or know someone who has one. They're an important, influential band to a lot of people, and what's happened as a result of said importance and influence is that in the nearly eight years since their last LP Oh! Calcutta!, too many bands have taken to blatantly and imprudently aping their sound with decidedly mixed results. There are now more bland melodic punk bands than ever before, and with the genre sorely needing an injection of energy, there's no band better suited to do it than the Lawrence Arms.

It's great to have them back. While Brendan Kelly, Chris McCaughan and Neil Hennessy have remained active independent of each other since Oh! Calcutta!, the trio's chemistry, both on record and in a live setting, is superior to anything they've musically achieved elsewhere. The band will look to reaffirm that chemistry with Metropole (out Jan. 28 via Epitaph) and if "You Are Here" is any indication, they're well on their way.

It's interesting and ultimately prudent that the band chose a McCaughan-fronted song to release first: Though he and Kelly made a point to "share" singing duties on most of Oh! Calcutta!'s 12 tracks, that album felt very Brendan-heavy in the vocal department, the two dominant personalities of the band coagulating somewhat. But that duality is part of what made the Lawrence Arms so great, and it's one of the biggest reasons why their music has affected so many people: Without Brendan's weathered-but-often-urgent snottiness, Chris' cleaner, more solemn voice would be off-balance and vice versa. Going back to that dual approach, as the band seem to be doing for Metropole, should be very good news for fans.

"You Are Here" is classic McCaughan and classic Lawrence Arms. His lyrics reek of longing introspection, as they often do, and Kelly's backup vocals in the chorus complement instead of dominate. The musicianship, often the most overlooked part of this band, is particularly strong: Hennessy's drumming is workmanlike, tightly-wound but not overly showy, and though the chord progressions are fairly straightforward, McCaughan throws in a few flashes, particularly around the chorus, that superfans and guitar nerds might grow to love.