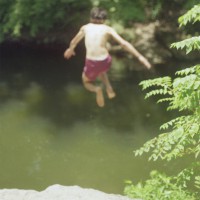 The World Is a Beautiful Place & I Am No Longer Afraid to Die pose one of the biggest questions to life in this record, aptly titled Whenever, If Ever. Usually it's asked as 'If Not Now, When?' and no, I'm not referring to Incubus. TWIABP use this record to spill their guts on life and through their knack for visceral storytelling, attend to the question regarding the emo resurgence in modern rock. Is emo back? Did it really leave? Well, TWIABP affirm that it's alive and kicking regardless of where you thought emo went.

"Heartbeat In The Rain" builds on stirring basslines and a riveting math-rock template. The multiple vocalists and intricate guitar-picking add so much dissonance while keeping a steady melody. Fusing such a fuzzy pop feel with fits of indie and even screamo may seem overreaching, but to this band, it's not a difficult task at all. The cracking vocals and despair ooze at every turn and with synthesizers and trumpets firing from "Fightboat," TWIABP come off like a faster, rockier, gruffer and edgier Arcade Fire.

There are some longer tracks, but the majority fall under three minutes which pace the record well and allow ample time to breathe. The opening four tracks paint an existential crisis that sets the pace for large think bubbles throughout and by the album's end, culminates in a satisfying epiphany. There's a sense of abandonment and a thrashing upbringing in the opening half of the record but their abrasive presence is softened by a growth of optimism, the emotional release as well as the rounded production of the latter half of the album.

"Picture Of A Tree That Doesn't Look Okay" is the ideal slow tune that stretches out the pace and momentum, instead of supplying instantaneous gratification. The lyrical narrative burns like embers as TWIABP grandstand further curiosity about self-purpose and destiny. "Ultimate Steve" replenishes that grandiose Arcade Fire effect with a multitude of tortured vocals. "Gig Life" punctuates the latter stages of the record and the sense of reassurance comes amid distorted guitars rooted in that buzzing feel of emo/indie rock.

There's a deep commitment and emotional investment when you create something that is very near and dear to you, and when that is torn asunder by sociopaths who don't give a shit about your feelings, the ways you seek to exact comfort is innumerable and that's what Whenever, If Ever proves to be - soothing, comforting and a haven for repressed anger, guilt or sadness.

This record is more than a growth spurt away from the rotation of TWIABP's previous music, as it delves into the grown up fold for the progressive post-hardcore and post-rock acts at times. Yes, that's how diverse this album gets. Meticulous tracks such as the aforementioned "Gig Life" and "Low Light Assembly" consolidate the band's past footsteps and future directions in singular form. It may be the most "mature" material to surface from the band. Delivering woozy vocals circling around a fluted chorus may be their comfort zone or it may come as musical middle ground, but the closer is jarring and piercing as can be to translate their final message home. TWIABP build with such elegance to this closing chapter.

There aren't any odd notes or massive walls of noise produced in "Getting Sodas." It recounts friendship and love through a sprawling canvas, as the band build a smashed euphoria. It's the centerpiece. The genre's transcendentalists may well extend the connective tissue of TWIABP between their eruptive reverb, distressed sound and earth-swallowing pummeling beyond the atmosphere of indie. The 'new' atmosphere they breathe here is built on eclectic solos, dynamic guitar play and a scathing metamorphosis from start/stop post-rock to a touch of post-hardcore. As it ends, it exhales unified choruses and a dreamy head rush of soul-baring gaze as one of their heaviest songs to date. The World Is a Beautiful Place & I Am No Longer Afraid to Die pack so much into Whenever, If Ever and if they're gonna top this, I want to be around to hear. It's gonna be a really fucking tall order.