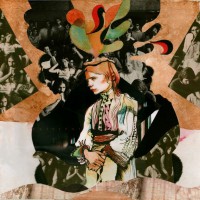 I saw Colour Revolt play a wonderful headlining set at the 240-cap Great Scott bar in Allston, MA, in October 2011. There couldn't have been more than 30 or 40 people there. It wasn't uncomfortable, necessarily, but it was disconcerting that a talented and genuinely very good band who have (maybe un)intentionally tried connecting with every audience imaginable (doing tours with Brand New, Taking Back Sunday, and Thursday, who could all be considered the kings of "modern emo," or what have you; releasing a debut EP on a major-label imprint; releasing a full-length on a mostly niche blues label; touring with the friggin' Breeders) could only yield this sort of draw in a hip, major metropolitan market after all that. Maybe it was an anomaly of a night. Maybe it wasn't. What I'm getting at is, if Colour Revolt could only do so much here, what hope on earth does a band that follows them in the same vein have?

It's almost scary to say, but Existent, well, exists in the face of that likely resistance to growth. Reverse the Curse started out as a possibly major player in the late 2000s post-hardcore revival with their 2009 EP, Paths, seeming like a band who could have an annual glory day at The Fest at the very least. But they more or less ditched that sound for the full-length that followed, 2011's Hither & Yon, a far more progressive and uncompromising indie rock procession full of Tom Waits nods and succesful experiments and Southern snarl and Rhodes keys. And it's where the similarities to a criminally underappreciated inspiration started to become obvious.

Existent continues much in the same vein, while hinting at one of Colour Revolt's closer parallels–post-Deja Entendu-era Brand New, though avoiding the darker theater rock choruses and going more for grinding hooks and an earthy, rhythmic, forward momentum that feels creeping and slinky. But moreover, it also sounds less like their most direct influences than their past two releases did (Paths no longer even in the rearview), with more of a unique stamp and maybe even more highlights than Hither & Yon had. Proper opener "Ida the Younger" introduces the chilling effect frontman Ed Starcher has harmonizing his sinister, gravelly tone with complementing female leads (a trait they lean on more than once on Existent, but to gripping effect) as tambourines shake in the back and the beat pushes the whole thing forward. "Carer" teases out a throat-searing chorus fans of tasteful abrasion should appreciate. "Specter" builds a patient and compelling bridge. "The Hum Heard" could be the best, with haunting verses leading into a rattling, major-key chorus that enlivens the mood. "Deliverance" is just another reminder of how good the band is at crafting an absorbing beat, though its rise-and-fall vocal melodies lead it well.

The album's a step or two shy of remaining totally mesmerizing throughout (and maybe same-y enough to occasionally bleed), but the individual songs' shifts are dynamic and unpredictable, and it's where the band's strengths often lie. You never quite hear the trajectory moving from subtlety to caterwaul catharsis until you're already there, but both points carry an enjoyable, decorated emotional strain with quiet reverb and roomy boom. You like "vibey" stuff? Existent's that for sure.

So, yeah. Existent exists somewhat in the shadow of something that may have already proven to have a confoundingly low ceiling. But letting it play through, one has to pray that it reaches many more ears. Three key releases in and Reverse the Curse have become a secret that deserves to be unclassified stat. It took the Sox 86 years to break it. If it takes the band 86 albums, they'll probably all be great.

Bone Cave Ballet: Will of the Waves [EP]