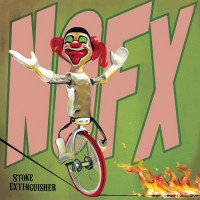 If you weren't impressed with NOFX's Self-Entitled like me, you might be thinking twice about checking out the Stoke Extinguisher EP. But thankfully, it's concise in its six tracks, not to mention boisterous, loud, vibrant and basically holding that energetic essence that NOFX initially peaked with in the '90s.

The hard-lined nature that screams NOFX is abundant in the hardcore-tinged opener and title track, with galloping riffs shuttled in with slick little hooks and Fat Mike atop his game. Cutting back on the elitist arguments and semantics of the band's past records, what happens on Stoke Extinguisher, which I think fans will appreciate, is a throwback to what made NOFX who they are. This is complemented by their previously released cover of Tony Sly's "The Shortest Pier," which is as endearing as it gets.

The bass-powered demo of "I Believe In Goddess" adds layers of nostalgia once more. It's edgier and packs a lot of punch. There's vitriol in the punk of NOFX, of course, but while nothing too innovative comes of this EP, the simplified breakdown works. The band neatly balance the crudeness, anger and political bent of these tracks. While lo-fi, reverb-filled vocals change courses to help unleash unbelievably fat guitar riffs accompanied by the band's trademark blend of melody and pummeling rhythm, Fat Mike really helps distinguish the majority of the record as nothing too vintage or forward thinking, but one that ignores the rules and isn't afraid to be itself. He measures the distance and pace of his vocals well.

"New Year's Revolution" ends as another lowbrow, compact punch of quintessential NOFX. There's no need to reinvent the wheel or push the envelope anymore. I wouldn't want NOFX resting on their laurels, but they've earned the right to have fans just sit back and listen to the detours they want to take musically. If we ingest them well, that's a different story, but I think they've earned more than a modicum of respect for what they've done. They stand true to their ideals on Stoke Extinguisher and I couldn't ask for more.