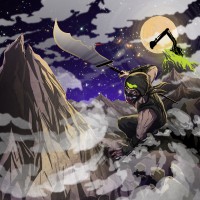 Superheroes are rarely as verbal as this.

The Mad Conductor swoops down from the skies again to deliver another fresh look at hip-hop. It's a good thing too, because it is their first release in a long time and it is wonderful. It's also strange to think that this isn't the only "superhero-driven" rap record to come out this year. (See: Deltron 3030). If you're confused about the comic book references, it'll make sense when you listen to the songs. The Mad Conductor, who have some ex-members of that crusty skacore band No-Cash, have been making super original full-band hip-hop for a while now. Like Deltron 3030 or Dr. Octagon, the songs are conceptual in nature. MC Devlin isn't just an MC. He's also a kung-fu wizard that works nights as a vigilante. In one song, he's a baseball player. Most importantly, he's an MC, and he's a damned good one.

Each song is a carefully crafted psychedelic-ska-hip-hop amalgamation of awesome. There are a lot of instruments on each track, making the overall feel to be large and at times, grandiose. It's lyrically smart most of the time and leaves a very complex taste in your mouth. MC Rises is a fantastic escape from the same-old, tired, self-aggrandizing hip-hop that plagues the world today.

The record clocks in at fifty-seven long minutes, and that's quite a fifty-seven minutes. Similarly to Titus Andronicus' The Monitor, each song stands alone as a very large and wonderful piece to a big wonderful puzzle. To digest this record as a whole is difficult at first, but proves rewarding over time. Some of the songs on MC Rises are absolutely perfect, though, so it's not too difficult to swallow after a while. "All Men Are Brothers" is kind of a weird point on the record. It adds to the comic-book storytelling conceptualization of the album, but as a song, it stands out as part-skit, half-spoken word, fully strange. It just feels out of place. "A Knight Amidst The Chaos" also has some strange moments like this, but the majority of its (almost) ten-minute length is wonderfully soft and beautiful.

It's hard to pick one, but "Conduct The Madness" is probably my favorite song on MC Rises. It gives me the feeling one gets when one hears someone speak the title of the movie they're watching from inside the movie. "Conduct The Madness" strikes me as The Mad Conductor's opus of sorts; it's the all-encompassing song that tells the whole story. The chorus is delightfully simple and what you'd come to expect from The Mad Conductor. The song winds down with a noisy and distorted synth crunching its way though a lead as it fades out.

MC Rises hits all of the notes you'd hope it would with a resounding "THWACK." When compared to the group's other albums, it goes on way longer and touches a lot of really high points that the others failed to reach. It is easily the band's best effort so far. There are some bizarre moments, but they fit right in with the overall concept of MC Devlin as a crime-fighting, spin-kicking, lyrical maniac. MC Rises is an extremely fun record and should not be overlooked if you're into hip-hop and/or ska whatsoever.

Paper Arms: The Smoke Will Clear