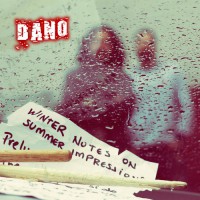 Looking for an outcome to please their best aspirations, Daniel Eduardo Mafra and Leandro Pretti Mozachi (NÃ) came together to start a punk rock/hardcore duo entitled D.A.N.O. and after approximately two years of work they have delivered in November of 2013 the album Winter Notes On Summer Impressions.

With Leandro NÃ´'s drumming experience – known for being a founding member of Brazilian hardcore band Dead Fish and the one responsible for leading them to national recognition by the end of the '90s – coupled to what is, without a doubt, Mafra's disquiet and necessity to express his thoughts, singing and playing as if he is presenting again his monograph for a bachelor's degree in history, both of them bring on feelings of strength and excitement a band of this style needs to have.

Sung in English, apparently with no fear of rejection in Brazil, Winter Notes on Summer Impressions might not be easily assimilated in a first hearing even if it were in Portuguese. This is exactly what makes it more interesting. You would rather let the songs flow, getting involved the way you sense it's the best for you. I could identify myself with the sonority of the whole record after focusing on the lyrics, on their narrative.

For us living in such an upside down planet, which drags down who cares about questioning what is wrong or what could be enhanced, where incompetence or corruption are part of the daily routine of those who hide behind their own interests, and the search for stamped happiness has no limits, the duo call for reflection and consequently to raise new questions and opinions.

There's no need to point a song or influences from other bands, the punk rock/hardcore essence is present in every minute, confronting anyone, willing or not to receive a slap in the face, to take a test of what is worth living for. After all, who is going to pay for all of this? The chance to find out and to understand is only yours.

Masked Intruder: Under the Mistletoe [7-inch]