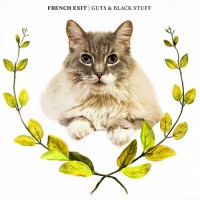 French Exit's debut LP Guts and Black Stuff, aside from taking its title from an excellent Simpsons reference, is a powerful record that is representative of the best that southern California's underground punk scene has to offer. The band's lyrics hit with an emotional punch to the belly very much in the same way 50 Slim Jims would. Able to turn the most melancholy of situations into rousing singalongs with ease, they'll have you singing as loud as you can while crying into your bottle of whiskey. Songs like "DKE," "Defensive Indifference," and "Statecheck" are prime examples of anthems that will help listeners self-medicate night after night.

The album's sound walks the line between raw and refined, yet sits comfortably enough between the two to enjoy the best benefits of each; there are no unnecessary bells and whistles to take away from the band's performance, all while still having an incredible production value. The vocals are crisp, while still organic; you can almost feel the gruffness from each of the band's three vocalists rubbing up against you. It is very much the audio equivalent of a fluffy cat squeezing close for cuddles.

Overall, Guts and Black Stuff is a solid first full-length release from French Exit that sets the path for what looks to be a successful career. However, not a slight against the music, it might have been better to have release the record in 2014 as the music world tends to stop caring about new releases around mid-November. Regardless of the release date, this is an album that you should definitely check out sooner than later.

Dowsing: I Don't Even Care Anymore