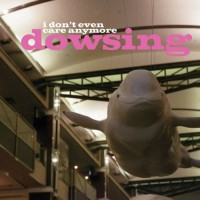 Dowsing are one of those bands who cut deep. There's a lot of tragedy, sorrow and heartache involved when they churn out their '90s-influenced emo. But these Chicago natives can definitely be celebrated because when they do what they do, it's crisp, melodic and in tune with what the world needs - waves of honesty and conjectures of truth, told tenfold. I Don't Even Care Anymore is something of a self-explanatory title, and as sonically depressive as the record gets at times, it's bursting at the seams with an aura that makes it highly memorable.

Latching onto the harsh message of "If I Fall Asleep The Cats Will Find Me" spins the clock back to It's Still Pretty Terrible and It's Just Going To Get Worse. Their earlier material definitely had some head-scratching titles but much like this record, the content is often totally the opposite of the title. Drifting in and out of Dowsing's consciousness is surreal, given that Erik Czaja and Gooey Fame usually take the listener for a downward spiral of a trip, story-wise. Czaja is lax in his delivery, which translates his tones perfectly. There's melancholy galore, as seen with the dreamy sequence and arrangement of riffs which open "Meant To Shred." The Sunny Day Real Estate and Small Brown Bike influences largely unfold here; the ensuing self-titled track messes with a poppier-punk tone to good effect.

These songs are all rife with emotion and as a preamble to "Everything Works Out," it lends great depth to the prelude of optimism that the aforementioned songs offer. Whether it's a precursor for a happier take on the record's end or a one-off bout of hope, who knows? As an interlude, this track settles the dust and gives the album time to breathe. "Ferret Feelings" then glosses over a Kid Brother Collective-style of sound that adds even more value to a record that's already building substantially well at this point. The gloom tone diminishes deeply by now, and as the feel grows less and less depressive, Czaja's guitars and the raw, cracking and coarse kitwork refine Dowsing's presence even more. The production still maintains a somewhat unpolished feel in certain areas but overall, the assembly of tracks bind pleasantly. It's hard to not be satisfied.

"Still Don't Care" helps round off the record, as Czaja mouths off on his mettle being tested in life, how he procrastinated in the name of love and how he found sanctuary and solace in places he never felt he would. The organs on this track add a cohesive dimension to what already would have stood up as one of their most seamless acoustic recordings. Dowsing probably stress more on the emo side of things on this ten-tracker than on any previously released works. The conundrum that Czaja likes to calmly torture the listener which, in a good way, comes off even more poignant this time around. It's a maelstrom of woe and portrait of agony at times, but, that's exactly what makes Dowsing the band they are today. They make 'hurt' sound so good.