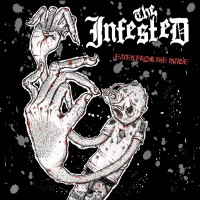 Eaten from The Inside is the second full-length from the Infested, and it rocks.

Production quality has been stepped right up since Myths, Lies and Hypocrites, in fact remarkably so given that the whole thing was basically recorded by Andrew Grigg himself in his room (twice, in fact, due to a hard drive failing the first time around). Anyone calling it overproduced, however, would be kidding themselves: if anything, the crisp sound does the tunes proper justice. The musicianship is equally tight, with intricate guitar melodies woven into steady drum machine beats, and a couple acoustic instruments thrown into the mix on certain tracks. Ska elements are of course still present, with songs such as "Anti-Choice," "Deficit (Our Generation)" and "Demon" perpetuating the crack rock steady feel pioneered by CV and LÃ¶C.

Lyrically, the album is pretty diverse, and hits home on just about every track. Topics ranging from religion, racism and abortion (But when your daughter's raped, will you still be anti-choice?) to crooked politicians, greedy bankers, and the Iraq war (You can't just ignore, the damage you've caused / You can't just forget, the thousands slaughtered) come alongside more personal and introspective pieces, such as the two-part "Nightmare," which fits seamlessly into the mix. "Backstabber" is reminiscent of the Myths track "Not Dead Yet."

The bitter struggle with disease evoked in the album title is addressed in the eponymous "Eaten From The Inside" (And when this cancer's gone / It might not be for long / Until my dying day / I'll live life anyway / And if my time runs out / I'll give it one last shout, / I'll scream it from the trees / To hell with this disease) and "The Waiting Game," while "Never Coming Back" recounts the death throes of someone obviously close. As somebody who witnessed the death of their own gran, I was also particularly touched by "Who I Am" (You cared for me, when I was young / But now you're old and it's you who needs someone [...] But still you smile, and you laugh / Despite your problems, you're still my Gran). A few of these themes may not fit your classic ska/punk/crack rock expectations but they are most definitely some of the strongest output in the genre.

In fact, there is not one skippable tune out of the 15, right from the thrashy intro to "Begin The Infestation" up and until to the closing violins of "The End." Grigg is a fucking mint tunesmith and the years of work show up in the final result. Album of the year, hands down.

Iceage: To The Comrades / Jackie [7-inch]