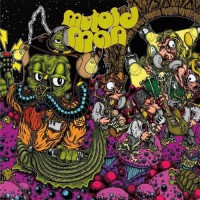 Stephen Brodsky of Cave In and Ben Koller of Converge and All Pigs Must Die make up two-thirds of Mutoid Man. That alone should encourage most fans of modern independent hardcore and metal to give Helium Head a spin. Here, we have a pair of the absolute brightest and most innovative minds in the genre rejoining forces (Koller briefly drummed for Cave In back in 2005 and 2006) and it's pretty much exactly like having Michael Jordan and Scottie Pippen play for the same team, if Jordan and Pippen were a couple of psychedelic metalheads from Boston instead of basketball hall of famers.

Based on the pedigree of their members, Helium Head is more or less exactly what fans would expect, but the familiarity doesn't make the trip any less fun. These songs–just seven of them in about 16 minutes–twist and turn with the furiously reckless abandon of Koller's most affecting work with Converge, and contain enough doubletime Sabbath-in-the-space-age riffs from Brodsky to satiate any Cave In enthusiast. "Gnarcissist," "Scavengers" and the especially excellent "Sacriledge" blaze by in mathy bursts, with loads of frantically calculated drumming and lightspeed guitar-tapping. Brodsky's vocals are distorted throughout, which oddly make the standout moments such like his Robert Plant-esque howl on "Scrape The Walls" all the more memorable.

Those howls are replaced with guttural screams to great effect on the completely bonkers "Friday the 13/8," which, yeah, is in 13/8 time but doesn't seem cramped at all. "Lost in the Hive," meanwhile, has the drive and dirty heaviness of some of Cave In's earlier work–rejoice if you're still clutching your original press of Until Your Heart Stops–and "The Manimals" closes Helium Head in similar fashion, with a hooky vocal melody from Brodsky and demonic riffs.

While Mutoid Man is unquestionably a side project–Koller stays pretty busy with Converge, and Brodsky's exploits with and without Cave In are near-constant and well-documented–Helium Head benefits from that. It's calculated, but has a extremely appealing, fast and loose quality to it that fans should enjoy quite a bit.

Chrome: Half Machine from the Sun