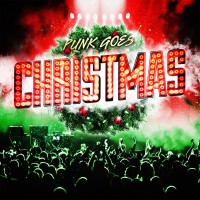 Nothing goes with your eggnog quite as well as a Christmas album featuring your favorite, mediocre pop-punk bands. That's what Punk Goes Christmas, the latest from Fearless Record's Punk Goes series is though; a compilation of often over-produced, festive tunes from the genre's "B-teamers" that is about as hit-or-miss as Grandma's Christmas bunt cake. Nevertheless the album presents some feel-good tracks from its bigger names with a few surprises mixed in. This review will start from the beginning and go song-by-song.

The album leads off with one of its best tunes, "Northing for Christmas" by New Found Glory. These veterans of pop-punk show their softer side with this nearly acoustic heart-warmer that utilizes Jordan Pundik's vocals in the first and second verse before giving way to a group sing in the chorus. The album amps up with track two, Fool's Holiday" by All Time Low. ITunes most popular song on Punk Goes Christmas is power-chord heavy with a few jolly jingles and hums mixed in, ultimately bouncing its way to a powerful finish. It's a solid performance by the band's standards.

The biggest surprise on the album comes from its third track, "I Had a Heart" by Real Friends. This angst-filled tune is relatable, possibly turning you into a fan of the band in its brief two minutes and forty seconds. Besides the song, the music video is beautifully choreographed and worth a view. Man Overboard follows with their rendition of The Kinks 1977 classic "Father Christmas." What had potential to be one of the better songs on the album turns out to be unbearably whiny and essentially unlistenable.

Summer Set's overly produced "This Christmas" is next. The track isn't horrible by any means, but its synth-driven melodies provide nothing unique and as a whole doesn't garner more than a listen or two. Crown the Empire's sluggish and excessively dramatic "There Will Be No Christmas" rounds out the first half of the album.

If there is a "best song" on Punk Goes Christmas, it is "Christmas Lights" by Yellowcard. It is a beautifully written tune about lost love, opening with a subtle croon from Ryan Key before giving way to a powerful, almost anthemic last two minutes. Light on the violin, "Christmas Lights" emulates Yellowcard's last two albums and is one of their best songs to date. Next is Issues "Merry Christmas, Happy Holidays," an almost carbon copy of âN Sync's original version, which is great if you like boy bands. In their defense, Issues utilizes the throaty scream of vocalist Tyler Carter (formerly of Woe, Is, Me), something you didn't hear from Justin Timberlake in the original.

Former Mayday Parade singer, Jason Lancaster, provides one of the standout songs on the album, "All I Can Give You." A simple compilation of Lancaster's vocals blended with soft piano melody provide an easy listen, and might get you a little action if you pop it on it on at the right time. Next up is The Ready Set's "I Don't Want To Spend Another Christmas Without You" featuring singer Jordan Witzigreuter, who sounds like an overly caffeinated Justin Bieber. If you are looking for anything remotely punk, avoid this song.

Set It Off's "This Christmas (I'll Burn it to the Ground)" might be the most unique song on the album. This sinister, almost spooky tune resonances like something off a Tim Burton movie, conjuring dark images of burning Christmas trees and tortured Santas. I half expected Skeleton Jack to make an appearance in this surprisingly fun track. The album concludes with its first and only non-secular song, "Do you hear what I hear" by William Becket. The former front man of The Academy Isâ¦ is in superb form, delivering what is one of the vocally impressive tracks on the album. Uplifting and spirited, the cover is the perfect capper.

Considering the downward direction of the Punk Goes series, Punk Goes Christmas is solid compilation of both covers and originals. Although there are a few duds, a majority of the album is well done and does justice to the holiday. The standouts are the slower, more heart-felt tunes from New Found Glory, Yellowcard and Real Friends while All Time Low and Set It Off provide top-notch tracks as well. All in all, it is a nice album.