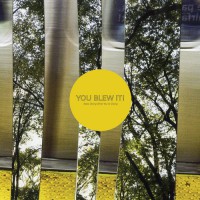 There's been a lot of talk in larger music publications and even mainstream news outlets about an "emo revival." The merits of this are dubious at best. Readers of this site and sites like it know that emo never really went away. Turns out, all it just needed a conveniently-coined marketing catch-all and better publicists. As silly as the term and its origins might be, it is doing some good: Bands who would otherwise never receive exposure outside of a very specific scene are garnering recognition from the fringes of the mainstream. The means are a little wonky, but the end is something we should all be happy about.

One of the bands at the forefront of this movement is You Blew It!, and although their sophomore effort is titled Keep Doing What You're Doing, it's almost immediately apparent that on the surface, the group did not take their own advice. The album is a louder, more direct cousin to their 2012 debut Grow Up, Dude – it almost seems like a reaction to that record at times – and it finds the band sonically looking outward instead of inward, something a lot of their peers haven't yet done.

Produced by Evan Weiss of Into It. Over It. (who also played bass on the record), Keep Doing What You're Doing has an edge that's simultaneously louder and cleaner than the chamber-emo direction of Grow Up, Dude. More open riffs, feedback and distortion cake these ten songs with an urgency and immediacy previously unheard from the band. The driving heaviness of "Match & Tinder" and "Award of the Year Award" set this tone right away, though there's an understated complexity still present, especially in the guitar work in the verses of the latter. Even the balladry of "Strong Island" and "House Address" contains more oomph, the latter descending into a powerful, percussion-driven coda.

Elsewhere, "You & Me & Me" and benefits from a more relaxed vocal approach from Tanner Jones, who spends a lot of Keep Doing What You're Doing effectively yelling over those aforementioned open riffs. "Gray Matter" has a Building A Better-era Park vibe, with tightly-wound musicianship and a huge, dramatic chorus. The already strong backend of the album closes even stronger with "Better to Best," which captivatingly captures the essence of everything You Blew It! have accomplished, both here and in the past: The poppy riffs and empty space used in the verses make the whoa-heavy intro and chorus hit that much harder, with an oft-repeated and highly relatable lyric of Maybe things aren't quite as bad as I let myself believe.

Ultimately, Keep Doing What You're Doing works because You Blew It! successfully channel more direct influences into their songwriting while continuing to show growth. Yes, the record is more accessible because of that and some fans shy away from accessibility for some weird reason, but it's also more memorable and will ultimately stand the test of time.

Self Defense Family: Try Me