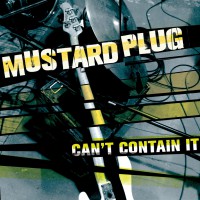 Mustard Plug is one of the very few ska bands still left in the game these days and thus far they've held up rather well, actually improving with age. In fact, they were a band I wrote off for years as I felt their earlier releases weren't all too impressive, not really putting out something worthwhile until 1997's Evildoers Beware. Since then, they've improved their sound with each release but it wouldn't be until 2007's In Black and White where they would put out, what I consider, their career defining release.

In 2007, the band put out what is arguably their best release to date. Since then, the band has maintained an active touring presence but in the last 7 years remained quiet on the physical output until the release of their latest album, Can't Contain it.

The album has a high energy to it, which I love. it's definitely something I can blast when I need some extra motivation to get shit done. It's a bit more cheery than their last release which I find to be both good and bad. The latter because I rather enjoyed the band delving into some darker, politically charged territory which they didn't really do this much this time around. The former because despite me wanting darker subject material sometimes you just need to do what feels right and for Mustard Plug a happy album just feels right. I mean, I guess I am being nitpicky complaining that a ska band is too happy in 2014. I should just be content that there are still some ska bands left to begin with.

There are some killer jams on this one. My favorite songs are "bang", "Gone and Faded," and "The All-Nighter". The latter of which name drops Cheap Girls, and any song that mentions those dudes is a winner in my book.

Mustard Plug proves that they can still deliver the goods even 20+ years into their career as Can't Contain It is easily in my top 3 releases from the band. Now that they've partnered with No Idea I hope I won't have to wait another 7 years for a new record. If you are one of the few people left who enjoys ska of the third wave variety this record is definitely worth your money.

NOFX/Masked Intruder/Implants: Live in Hollywood
Go to the review index