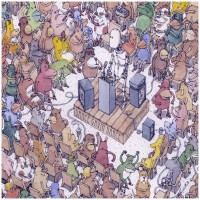 When it comes to Dance Gavin Dance, the argument, more often than not, boils down to your preference for whichever vocalist they're employing. That's the gist of most fans from my experience. Jonny Craig owned it and Kurt Travis didn't fully live up to expectations and after a carousel of line-up shifts, Tilian Pearson's charged with making their front remarkable once more. Acceptance Speech does well to catalog the band's transition, yet again from Craig, but it falls just short of the mark as you get the feeling much of the record hinged on the former Tides of Man vocalist, but he just misses out on leaving his mark on the listener.

"Jesus H. Macy" and Acceptance Speech" are prime examples of how well Pearson comes to adapting and reinforcing the luggage left behind by Craig. He does a great imitation while his clean, slick vocals help him sculpt his own sound, but it's a sound that runs the risk of becoming tired a few tracks in. Pearson's direction doesn't reinvent anything that the band hasn't already done but as usual, Will Swan's dynamic interplay is the foundation for DGD to taper their lyrics to. Swan's spot on as usual, tempering the record with his silky riffs and cutting solos, while throwing in his vocals here and there, and backed guitar-wise by Josh Benton. They give the early feel to the record that this could well be the closest to Downtown Battle Mountain, both chapters.

The record slightly meanders in the middle and gets somewhat bogged down by Pearson's voice, which seems at times a bit meek and overtly relaxed. The album's spine is touchy and as flustered as it gets, the musicianship of DGD still tries to shine through, with bonus points going to the tireless drums of Matt Mingus. The typical DGD formula of fast guitars, Jon Mess' gruff vocals and a clean throat to accompany Mess' bellows are front and center on the album, as one would expect. Steam is lost when it comes down to "Carve" which seems like a metalcore lobby to enter the Punk Goes Pop fray and the consistently annoying autotune that drains "Demo Team" of substance. If DGD wanted to prove that they're not ready to dip out the limelight just yet, these tracks don't do them any favors.

With those shortcomings isolated, they do improve to the latter end of things as they try to establish stability on a more melodic note that plays off Pearson's strengths. I could understand why they didn't go this route more, as it seems to stray from the original essence a bit but that minor evolution aside, parity is restored when they shift from a Kurt Travis-esque and bland "Strawberry Swisher pt. III" to the sexually charged "Honey Revenge". I"The Jiggler" reiterates the substantial melodic-emo stance of the record's conclusion with Pearson harnessing more of his Tides Of Man and solo characteristics via an upbeat vibe and catchy start-stop flow.

The record does end on a better note. Acceptance Speech isn't bad, but Pearson needed to stamp his authority a bit more and go off the handles on the mic. Felt like he held back a little but once this is rectified, naysayers will surely be thinking twice about criticizing the band. It seems a priority to mention that this feels like a new genesis for the band and it's odd ending on this note, saying this new lineup, offers a lot of potential. How far they go is up to them. And a lot rests on the shoulders of Tilian Pearson. No pressure, right?