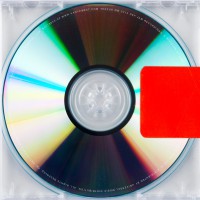 Since Kanye West's Yeezus made several best-of-2013 lists I thought I had might as well give it a try.

The first track, "On Sight", begins with some scifi-like electronic noise before the synth and drum machine kick in. When Kanye starts rapping, the snotty "fuck you" attitude so common in punk rock appears in his lyrics: ""Yeezy season approaching / Fuck whatever y'all been hearing / Fuck what, fuck whatever y'all been wearing / The monster about to come alive again"

This don't-give-a-fuckism is even continued in the bridge, albeit with an admittedly cheesy rhyme: "How much do I not give a fuck? / Let me show you right now before you give it up." Unfortunately, the verse veers into: "Get this bitch shaking like Parkinsons [...] Black dick in your spouse again / And I know she like chocolate men / She got more niggas off than Cochran, huh?"

I thought "Black Skinhead" might be punky, but sadly there were no Ois to be found there. To make a long story short, West basically "zones in" on some girls, but a noteworthy element does come in the form of a reference to the Iliad and possibly that cult film 300: "I keep it 300, like the Romans / 300 bitches, where's the Trojans?" So pleased was I to find this little nugget of Ancient history, I could almost forgive the error of mistaking Greeks for Romans.

Following that comes "New Slaves", one of the better tracks, which however doesn't escapee a classic reference or two to materialism and sex ("pussy ain't free" etc). In it Kanye offers a proposal to change the current social, political and economic situation by ejaculating on the wives of The Hamptins: "I'll fuck your Hampton spouse / Came on her Hampton blouse / And in her Hampton mouth". Then West digs into "Hold My Liquor", in which he crashes his expensive car into your cheap one, goes nuts to the point where his "bitches" can't handle him, and later wakes up with a hangover only to get scolded by said bitches' aunt.

"Blood On The Leaves" features some Instagram talk, and more "bitches", as well as a sample from Nina Simone's 1965 rendition of the song "Strange Fruit". The next track, "Guilt Trip", includes ("hit her with Jamaican dick") and "rockin' Chewbacca". After that comes "Send It Up", in which yet another "bitch" calls him "Elvis" while two others "suck like they came to lose".

The final song of the release is "Bound 2", as in "bound to love". In it, Mr West informs a lady "I wanna fuck you hard on the sink and then follws that with a double-entendre portraying his desire to ejaculate in her mouth and buy her a drink in repayment: "After that, give you something to drink", all while keeping in mind a sense of fashion and correctness ("Step back, can't get spunk on the mink"). Given some of the lines ("a real nigga hold you down", "don't tell your mom shit", "no leaving this party", etc), "bound" in this case does take a somewhat rapey connotation.

Prominent words in the album's vocabulary include the words "bitch" (24 times), "fuck" (26x), "nigga" (35x), and a handful of car makes ranging from Mercedez Benz to Land Rover. In contrast to the lyrics, however, the production is sophisticated, with an average of 11 writers and 6 producers per track (and much auto-tune to boot). Some of the more DIY music fans might actually label it "over produced", and the songs, while not stellar, might embody a new dimension in the more stripped-down environment of one of Kanye's live performances.

All in all, this release was overrated, and so if you decide to give it a listen don't be surprised if it doesn't meet the expectations set by many critics.