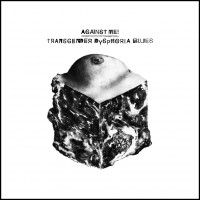 Since you are currently reading Punknews.org, you are no doubt familiar with the backstory of Transgender Dysphoria Blues. If, however, you've been living under a rock for the last three or so years, here's the Cliff Notes version: Band leaves major label, drummer leaves band, is replaced by young gun who reinvigorates band's live show, band forms own label, vocalist comes out as transgender, band begins recording album. Drummer leaves band abruptly, band cancels tour with Bad Religion. Album is re-recorded with temporary drummer. Drummer signs on as a permanent member. Bassist leaves. Fat Mike jumps in to help finish things up. Album is re-recorded once more, and that just about brings us up to speed. It's been an excruciatingly long wait for fans since the release of 2010's White Crosses, but the sixth Against Me! record has finally arrived, and it's an interesting one, to be sure.

New drummer Atom Willard makes his presence felt immediately in the title track's intro, which may very well be the most energetic AM! side one, track one since "TSR," if not "Pints of Guinness Make You Strong." The lyrics on this track, as well it's follow-up "True Trans Soul Rebel" deal with Laura Jane Grace's gender transition in a very upfront and honest way, setting the tone for the rest of the album, originally envisioned as a concept album about a transgender prostitute. While this will no doubt be a subject that the vast majority of Against Me!'s fan base cannot directly relate to, Grace has always had a way with words that makes whatever she was going through at a given time translate universally (Most of us have never had to deal with major label drama and we all still love Searching For a Former Clarity, right?).

Transgender Dysphoria Blues is Against Me!'s most stylistically diverse album in quite some time, musically speaking. It's most divisive song will undoubtedly be "Osama Bin Laden as the Crucified Christ" as there is no more accurate way to describe it than as a pure hard rock song; Imagine "Animal" from New Wave tanked up on a case of Red Bull. Grace's screams here represent the harshest, most raw vocals heard on an Against Me! release since Reinventing Axl Rose. It's wonderful. On the other end of the spectrum is "Two Coffins," the band's first full-blown acoustic ballad since 2005. Written for Grace's daughter, it is both haunting and beautiful.

Elsewhere, the band steamrolls through the Replacements-influenced punk rock with an emphasis on rock that they have been giving us since 2007, with the somber yet hummable "Dead Friend" and absolutely stunning "Paralytic States" (the only song the band didn't preview live before the album's release) standing out particularly. Things come to a close with "Black Me Out." Having been a staple of the band's live shows since not long after the release of White Crosses, at this point it's one of their most popular songs, and it's kind of shocking that it's only now receiving a proper release. It might not have the "grand finale" feel of say, "The Ocean" or "Bamboo Bones," but it's a great track and a fine note to close on.

The one unfortunate element of Transgender Dysphoria Blues that holds it back from pure brilliance is its production value. It's tempting to try and convince oneself that the production is simply "raw," and hearkens back to the band's early days. However, when listening to Reinventing Axl Rose, you would never have to spend your time turning the volume up and down several times in a song in an attempt to make it sound level. It's not charmingly low-fi, it's poorly mixed. Perhaps understandably so, as the album was Frankenstein-ingly recorded and re-recorded in several studios, but it shows, and the record is slightly weakened for it. The volume jumps are distracting. Grace did an excellent job in the producer's chair for Cheap Girls' Giant Orange, so it's a bit disappointing.

That aside, Transgender Dysphoria Blues is another excellent album for Against Me! and one they should be proud of, especially after all of the obstacles they had to climb to get here. The production issues aren't anything an anniversary remastered edition can't take care of a few years down the line, and the songs themselves are phenomenal. If you're still yearning for the band's pre-Fat days, you probably always will be, but if you've been on board since Searching For a Former Clarity, you'll find plenty to love about Transgender Dysphoria Blues.