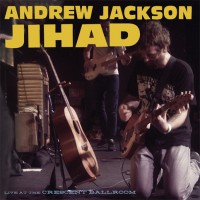 First of all, if you haven't seen Andrew Jackson Jihad live yet, you should because the banter between songs is hilarious and worth the price of admission alone. If you can't see them, then get this record. Live at the Crescent Ballroom, not only is a recording of the FULL BAND's (featuring Jeff Rosenstock of Bomb the Music Industry!) last show of their 2012 tour, but it has all of that famous Andrew Jackson Jihad banter and probably the best set list you can ask for from this band, which includes several new songs.

The two notable new songs on this album are called "Kokopelli Face Tattoo" and "#Armageddon." The lyrics of "Kokopelli Face Tattoo" has all of the angst, self-loathing, and emotional imagery that is so prevalent in this band's catalogue, mainly focusing on hate while adding a lot of random metaphors (Now I'm a toilet in a restaurant/ Somebody's gotta do it/ I know my place). "#Armageddon" on the other hand is a dark parody and a comment on society's obsession with technology and social media. This song is has some of Sean and Ben's best lyrics and imagery to date (We're all taking pictures with camera phones to prove that we were there/For the end of days/The end of days). It won't be surprising if this song becomes an Andrew Jackson Jihad classic.

Of the older songs they played on this record, the tracks that stand out the most are "Big Bird," "People II: The Reckoning," "Fucc the Devil," and "Hate, Rain on Me."

Hopefully Live at the Crescent Ballroom won't be an overlooked album that came out in 2013. It is one of the best live albums that have come out in a very long time and probably one of Asian Man Records' best releases.


Notes:
-The band actually introduces the "Salad Glove" between songs.
-The A & B side of this album comes in black vinyl, and the C & D side comes in white.

Goldblade: The Terror of Modern Life