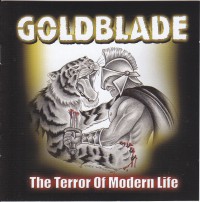 I've never really gotten into Goldblade, the John Robb-fronted punk/rock 'n' roll outfit that seems to have been around for an eternity now, and I suppose having formed in the mid-1990s they can be considered as long-standing and peers to many newer bands. The release of The Terror of Modern Life, the band's sixth long-player, is no mean feat and the longevity of Goldblade is something I am able to applaud.

My problems with the band though, revolve around the whole retro feel to a lot of what I hear on this record. I find too much of it is a punk-by-numbers kind of thing, with it sounding at times too much like bands such as UK Subs and The Clash to name but a few. I find myself having to check the sleeve notes to see if Charlie Harper provides the vocals on some of the songs, so similar is John Robb's voice to the elder statesman of punk, and where that is not a criticism, it does nothing to stop me hearing too many comparisons.

I'm not dismissing the whole record as there are occasional moments that really do provide a bit of a spark, most notably through "The Shaman Are Coming" (which features a much funkier sound and seems out of place, but in a good way), "Someone Stole My Brain" and "An Atom Bomb," but these are few and far between across the thirteen tracks. They are easily offset by the likes of "Psycho Takes A Holiday" and "Sick / Tired" which to me are a bit of a mess musically and lyrically. The album ends on a fairly inauspicious note, with the title track taking over eight minutes to find its end and the three listens I've given it are probably three too many (although the opening ninety seconds are not too bad to be fair). I'm okay with meandering music but this is test of my patience.

It does seem as if the tracks that have more in common with Robb's previous band, The Membranes, are the ones that stand out a bit more as opposed to the uninteresting anthems that make up the majority of The Terror of Modern Life Perhaps he should be looking to his own work for his inspiration?

There's no denying that the musicianship heard on the record is of a good quality, as is the recording itself and I doubt that the sentiment behind what Goldblade is doing can be questioned, but I cannot stop thinking that a lot of the tracks lack enough originality to keep hold of my attention and that is why I struggle with it.