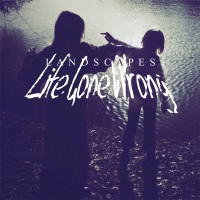 Landscapes have a good grasp on modern hardcore. There's no doubt there. Infusing a screamo foundation and cutting back on their older hardcore-punk vibe has worked for them. However, Life Gone Wrong while building on their older music still leaves you in that boat wondering if the promise and hype billed has been fulfilled. It's not a bad record. In fact, it's decent but it's still left as if you were sold a tad short.

There are spurts of black-metal added to the pot to show how much Landscapes want to test themselves. "No Love" drags on the hardcore aspect of it while "D.R.E.A.M." plays off the aforementioned black metal vibe and this comparison testifies that the latter is the recipe they should have followed. It's nothing like Departures or The Saddest Landscape but I feel that these routes offered a better outlet for the band to express themselves.

Toying with spoken-word a la "Providence" is a huge thumbs-up and fans could attest that this dashing stroke was pure, unexpected genius. The record plays off experimentation a lot and varying influences add a lot of fodder to the cannon. "Coming of Age" slows the tempo down a bit, but it's still relatively hard a track. These two tunes do create a feel of depression, but from the listener's vantage point. It's acceptable and in line with what Landscapes are known to do. They aren't making trendy or memorable music but they are equipped to do so. There's a provenance of freshness that most hardcore bands nowadays struggle to find or acclimatize themselves. Landscapes tinkers with the right tools but just lose sight of the prize.

I've heard so many fans recently saying what they think IS hardcore or modern-hardcore or post-hardcore and I guess Touche Amore stroked that fire with September's Is Survived By. But those critics I think would be sufficiently impressed with Landscapes to know that there's potential. The thing is that by now, I thought they'd be fulfilling much more of this potential. Let's hope they ramp up their game and they do it soon because once they do, prepare to take notes.

Against Me!: Live in Fort Lauderdale