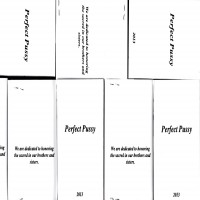 Meredith Graves has a history of being willfully obscure. Her old band, Shoppers, was Google-proof. Her new band, Perfect Pussy, almost got me in trouble with my wife. Their EP, I Have Lost All Desire For Feeling, was issued on cassette and got-damn floppy disk. Neither format comes in a case. In short, she does not compromise. Hearing her songs must be earned.

Sonically, Perfect Pussy sounds like a continuation of Shoppers. Punk verging on hardcore, Feeling is super lo-fi, which suits all the tape hiss anyway. Vocals are low in the mix and the band sounds grainy. Bits of buzzing melody bubble up in the leads, but it's all a haze.

Oh but how these songs cut anyway. Perfect Pussy has an album coming out in March, entitled Say Yes to Love. Hopefully they can build on the promise shown on this demo. Shoppers had a brief but brilliant run, but it's about time Graves put herself out there more.