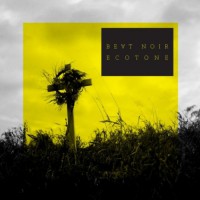 Beat Noir have adapted and refined their easy-going, classy and straightforward approach to mid-tempo punk in more ways than I expected, given that I felt they were selling themselves short as with Permanently last year. It was a decent four-tracker but I expected more and Ecotone is a great improvement for a bunch of Ontario guys.

Their approach is a candid one and it's more alternative-punk than emo. In fact, it's more alternative than pun. "Song for Passivity" is their tongue-in-cheek warm style embodied to the fullest. It segues into the more telling "Nicky Driscoll" which wanders a bit in a twinkly guitar-drive backed by mixed vocals and 90s-esque keyboards, which fulfills their quota of emo on the record. It fuels the band's diversity in sound and adds a relaxed focus. The first half of the record is enjoyable but not a big force to be reckoned with as is seen with the grassroots pop-punk tune "Muscle Memory" a la old-school Transit and Pentimento. Thus far, it's palpable but from here, things flow much better.

The bass-laced "Collage" is heavy and thick with darkness and cynicism. The intricate and mathy guitars outclass the rest of the album and on top of distorted guitars, their diversity shows up even more. They straddle the shoegaze line soundly here. The second half feels more unrestrained while sticking to their openness and honesty. "Sheltered Town/Bitter Sea" is in the vein of Eve 6 with a more voice-cracking disposition as a ballad. The closers are substantially stronger as pop-punk/alternative kickbacks and make up for a slow start that doesn't pop as much. But overall, Beat Noir mix it up pretty well. It'll be interesting where they take things from here, but they've got an even better foundation to build on.