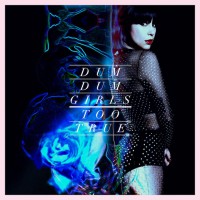 On Too True, the Dum Dum Girls' third full-length, we lose nearly all of their previous punk elements. And I'm ok with that.

Their full-length debut on Sub Pop, 2010's I Will Be, propelled Dee Dee and Co. to prominence in both the indie and punk worlds, melding 60's-inspired melodies with gentle feedback, a haze of reverb and and that punk rock vocal sneer and snare drum crack. Over the next three years, through two EPs and another album, 2011's Only In Dreams, their sound has evolved into something less 60s and more 80s. There is still reverb, the drum beats are still often uptempo and the melodies remain catchy as all get-out, but the production and attitude has shifted more towards jangly UK bands like The Smiths, The Stone Roses, and the less-mopey numbers by The Cure. I'm a big fan of jangle pop and Britpop, so this album once again does it for me. But it might not please fans of their rawer earlier recordings.

The single and video released prior to the album drop was "Lost Boys and Girls Club." The vid is fun, but frontwoman Dee Dee Penny looks more like Elvira than an Austin Powers fangirl, another piece of evidence that her inspiration touchstones have changed significantly. Trace the visual progression back to the beginning: They're a 60s girl group in the Only in Dreams "Bedroom Eyes" video and they're couldn't-give-two-shits punk chicks in the I Will Be "Jail La La" video.

Getting to the songs contained on Too True, "Rimbaud Eyes" is an instant favorite. It's proof of Dee Dee's recently-quoted inspiration of legendary poets and legendary poetic-minded musicians like Patti Smith, who also is a name-dropper of Arthur Rimbaud. The simple chorus of "You've got Rimbaud Eye-ee-eyes" on top of twinkly chorus-pedal and delay-riddled guitars and a danceable drumbeat make it easy to latch onto. Alright, so "Little Minx" gets a bit raucous towards the end with the pounding beat, but really the drums sound more "Dancing in the Dark" than Vivian Girls. It's not all twinkle twinkle--there is fuzz laying under the surface on "Evil Blooms", bubbling up as the last chord rings out. "In the Wake of You" will get the crowd pulsing, but the snare drum is still gated, 80s-style.

There are also more chill, downtempo tracks than previous releases. "Are You Okay?", "Under These Hands" and "Trouble is My Name" all kill the momentum too often for the set. Solid tracks, but another change in tone for the band, though they hinted at it in the amazing and touching "Hold Your Hand" off of their last one.

I've made clear that I enjoy the tone and sonics of the new Dum Dum Girls. That aside, I think this is the weakest group of songs on a Dum Dum record. Which is not to say it's bad and that there aren't gems, but there aren't as many. The earworm melodies are what hooked me in the first place; the raw attitude was just icing. If you enjoyed their last album, you'll likely be game for Too True. If they lost you after their first album, you won't be won back. Maybe this will be a grower for me, but it's not an immediate year-end contender for me.