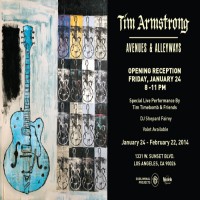 The set up for the event was rather nice. As one entered you were greeted one side by a dj set up and the other a display of the set of 45 screen prints available for sale that evening. Of all the screen prints present my favorite one had to be the piece dedicated to the song "Sidekick", One of many Rancid songs reinterpreted acoustically as part of the Tim Timebomb project and one of the first Rancid songs I heard back in the 8th grade. What I enjoyed most about it was the piece seemed to be an homage to the 1991 classic film Thelma and Louise as featured two women that had somewhat of a resemblance to the duo.

Walking deeper into the exhibit one could find various pieces of artwork based off of song lyrics from the renowned front man as well as some interesting portrayals of those close to Mr. Armstrong. You could find portraits of Tim's bandmates and even one of Davey Havok. Something about the portrait of Lars spoke to me. Could it be the fact that he had some kind of beverage in his hand and I was thirsty? Perhaps it was the fact that it looked like he was wearing a Harrington jacket similar to the one I had on? I couldn't really say to be honest I just liked the damn thing.

Eventually I made my way to the merch table full of various items for sale including shirts, 7-inches, tapes, and other knickknacks. If I were I a richer man I easily would have bought both 7-inches and at least a tape. However I am not and had to leave the table empty handed, for now.

As I came to the final area of the exhibit I was greeted by a beverage stand to my left and some more artwork to my right. I chose not to quench my thirst just yet and wander through the hallway to explore the final stretch. In this final area the theme of all the artwork present was "Not in the Rock & Roll Hall of Fame." The pieces in question were the preliminary entries meant to span 250 artists that are influential to Tim. Perhaps what was most notable about the pieces of art in question was not so much the subject material but the vessels in which Tim used to create them. Each piece was made on cardboard while on tour, as cardboard is plentiful while on the road according to the description of the piece.

As I finished my initial walkthrough in roughly 20 minutes my date for the evening and I both realized it would still be another hour or so until Tim's scheduled performance. Thankfully we ran into some friends and acquired some ginger ale to help pass the time. As the show time began to draw near we wondered where exactly would it take place given that the venue in question was much too small to hold the crowd, let alone a band.

Then miraculously there was announcement made, however I could not hear a word being said. After some investigation I was able to find out that the Tim's set would actually take place outside in the parking lot. Without hesitation my partner for the evening and I bolted out the door to position ourselves in front of the stage.

As we waited the PA played an eclectic and top notch mix of reggae and traditional ska hits. Then from the corner of my eye I could see Tim Armstrong take the stage alongside members of The Interrupters, Elvis of Left Alone, and two unknown horn players. They kicked off the set with "Into Action" from Tim's album, A Poet's Life. From there they went through a set list of covers with a few guest appearances from Aimee Interrupter, Matt Freeman, and the other members of The Transplants- the latter actually performing joining Tim in a Blitz cover. Somewhat surprising was that aside from the small Transplants interlude the whole set was nothing but ska music. My inner rude boy was screaming with joy, especially as the band closed with Soundsystem.

As the set came to a close and I made my way back to my car and so my date and I gave our wristbands to a pair of ladies before making our way to guisados for some tacos.

I found the event to be exciting and from what I could tell won't certainly be the last from the Rancid frontman. However, in the future I would like to see a bigger venue.The exhibit runs until the 22nd of February and I highly recommended that you attend.