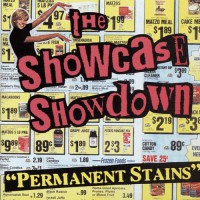 Permanent Stains was the second and final full-length from legendary Boston punks The Showcase Showdown.

Musically, the album heavily embraces classic three-chord progressions in an onslaught of energy only interrupted by concise, frill-less solos. With a vocal style reminiscent of John Lydon, the singer, Ping Pong, produces a mix of tongue-in-cheek humor and political commentary, all wrapped in an irreverent and a snotty attitude ("My friends all think that I'm a moron / That I'm so uncouth").

Many of the songs truly stand the test of time and continue to rock 15 years after the release date. "Duty Free" turns the true story of a man who was stuck for years in the international zone of Charles De Gaulle airport into an ode to freedom and the abolition borders ("Gonna rip up my passport / No more nationality / There's only one way to liberty / And it's living next to duty free / They keep telling me: 'Get Out', I say: / I wanna be free without a country / A non person in a non place / I wanna be free without a country"). "Neighborhood Watch" revels in the ridiculousness and paranoia of our society ("Old ladies with cellular phones / Watching the street through telescopes") but also serves as a striking reminder today, in the light of NSA spying and shootings such as that of Trayvon Martin. And the cult "Rip 'Em Off," a class-conscious apology of larceny against employers ("They're stealing all your time / So what are gonna do? / Rip 'em off, rip 'em off / Cuz they're doing it to you"), was even referenced in a comic by Mitch Clem.

Modern Baseball: You're Gonna Miss It All