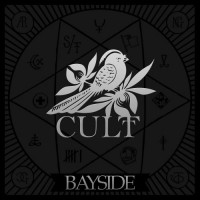 Of all the Victory-era bands, Bayside is the one that still maintains the essence of what made them to me, highly enjoyable a decade ago. Bands like Thursday, Silverstein and Taking Back Sunday chopped and fiddled but Bayside stayed true to themselves, and credit to ALL these bands, because no matter how much they subverted their shtick, they still did well. Bayside, though, got a bunch of unwarranted criticism for so many reasons. It confused me but alas, whether you're a die-hard of their old sound, someone who's chomping at the bit to rip them a new one, or someone who's honestly looking for good music while not giving a shit about any generic pre-dispositions, Cult sounds off as the record which will define the band, in an era where many wrote them off.

The thumping, cracking and fucking thunderous drums of Chris Guglielmo open the record with "Big Cheese". It's a deluge of an opener with sprawling guitars, slick riffs, cutting solos and the heavy rock influence drowns out the minor splices of punk. This tone is tempered down and the pace slowed later down but it's a great way to signal that the boys are back, especially Anthony Ranieri. His vocals really stretch out on the record and no doubt, feels like his best to date. The heavy rock influence balances out so well with his vocal exposition and having such a batch of tunes, low-concept and diary-like, will surely appeal to those who wanna lash out or to neutrals alike as it plays off as an ode to retrospection and yearning to be loved and accepted. This theme applies musically I'm sure as well as personally to Ranieri.

The catchy pop-punk "Time Has Come" is ridden with bellowing verses and a deep-lying chorus which is laced by the polished layout of Ranieri's clean sound. His voice really offsets any poppy tones throughout and is a big plus, as always. This is highlighted on the campy yet grungy "You're No Match" which feels like a sequel to "Masterpiece" with an angst and emo-infected rhythm. Jack O'Shea (lead guitar) and Nick Ghanbarian (bass) are crisp and effective in producing a lashing sound, which Bayside cultivated so deftly in years past. Their craft seems more reassured now as Ranieri brings out a mature, older sense of growth and development, in life and in music. It shows on the alternative-esque "Transitive Property" which despite a swath of heavy guitars is a personal tribute written to his significant other on tour when they were about to part ways. The album resonates more than first anticipated because of Bayside's versatility, which they've underplayed in albums of old yet still managed to eke out more than modicums of success. "Objectivist On Fire" feels as if it should have been an acoustic balled in its anthemic catchiness but grinding riffs, rolling basslines, 'whoa-oh's a la the 90s and so much more, add a melodic blend of spunk to it.

As the album's curtain drops with a pop-punk confessional and admission of guilt in "Something's Wrong" and "The Whitest Lie", it's apparent that Bayside decided to make Cult an album that drew the best of what they represented. They explored and found the right notes without trying too hard. The set of tracks cultivated here flows organically and with an emotional tug that draws more than just nostalgia. They're stomping on the terrain again and doing so with a vociferous sound and one that they should be very fucking proud.

Random Conflict: Tradition Is The Enemy