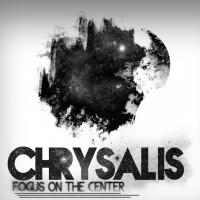 Hiatus time's over and Chrysalis is back at it. I vaguely remembered their stuff but I could recall that their 2006 self-titled had potential. They drifted out of sight, out of mind and I really couldn't care for their disbanding. But, you know the drill...bands come back and give it one more shot. I'm glad they did because as I took this in and jumped back to their older stuff, I realized that I underrated them. But, a little more musical ingenuity and I'd be completely sold. I feel like I'm back to square one with the band but the disconnective gap isn't as big as I thought it would be. Focus On The Center starts off strongly but peters out at the end as it leaves a not-so lasting impression but more an afterthought, that 'Hey, they're definitely gonna come better next time!' They distinguished themselves well enough but still, something felt amiss.

"Sounds of the Playground" acts as harder-rock version of Pierce The Veil, if such a thing exists. Anyway you take it, this is a risky record, with many influences strewn in, yet it manages to do its own thing. The band loves to experiment with genres such as old-school metal, screamo, nu-metal and of course, hardcore. It's a lot thrown into one cooking pot. It works more often than not here. "Thoughts Behind" fiddles with a Killswitch Engage meets Dance Gavin Dance-like setting which serves as the ideal precursor for "Instant Silence". This is really fucking stellar with magnificent drumming and a vocal delivery which Jesse Elledge pulls off a la Coheed and Cambria.

This balances the screamo and metalcore aspects of the band and as far as their hardcore take goes, work needs to be done. It's not that they're bad at it but they certainly don't want to end up in the generic pool. "My Forsaken" is steeped in rabid drumming and a black-metal vibe that has enough melody and clean vocals to counteract the screamo in the mix. It's a record of variance and it sits well but the misses do hurt a bit more than I'd have liked. Overall, Chrysalis have proven that they're ready to fulfill past promise and I'm eager to see how they flip the script in the future. With time off from the game, it seems they've got a plan to refine their sound and while this album hasn't been a hurtful step, I think it hasn't positioned them as strongly as they'd like. But there's a lot of positives to draw from this and it augurs well for the next move on the chessboard.