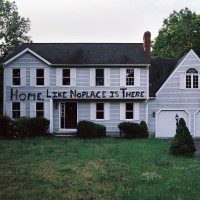 So how about this rebranding? Let me not nitpick. Their old sound was pretty solid - open, honest and emotional. The Hotelier continues in the same vein and as emo, melodic and warm as Home, Like Noplace Is There gets, there's still a rough edge to their music that takes them a notch above many in the game. This album is arguably their strongest music to date and they manage to shoot the most cathartic of bullets at you.

"An Introduction To The Album" offers a guitar-fueled ballad that signals just how well and how much the multi-layered vocals would be used on the record. It creates the most apt atmosphere of angst for the remainder of the record and "The Scope Of All This Rebuilding" plays neatly off this, with an anthemic, pop-punk beat. It's as alternative and contagious as I remembered the band which strides sweetly into the bass-ridden "In Framing". The tones of folk-punk would no doubt beckon for calls of yet another 'emo-revival' band but in its own twinkly pride, this record is full of guile and deserves praise. There's a lot of belief in the personal, subtle ideas embedded but The Hotelier carefully crafted this for success -- it's no accident that The Hotel Year (R.I.P) found new ingredients for their musical recipe while still shooting off their strengths.

Those ingredients are encased in cathartic rock songs, sent to delicate and destructive extremes with political statements through personal explorations. "Among The Wildflowers" shows just why. It's unique, disarming and powerful a la Jimmy Eat World, bar the more pronounced dual vocals. The mixed vocals really shine throughout and this musical sheen's gonna last a while as the latter half of the song pans out like a screamo/emo beast that should have been the record's closer. There's a dichotomy in "Life In Drag" that's melodic, screamo, calloused yet with an apprehension that I reckon they intentionally placed in. The lyrical tension is near-flawless and you sense the fractal influence of Sunny Day Real Estate and Small Brown Bike in more than a few doses - harmonic guitars, pristine vocals and a swoonish ambiance.

"Discomfort Revisited" winds things down in a start-stop harmony that's emo-punk to set the stage for "Dendron", with its distorted guitars and catchy disposition that sounds like a slightly upbeat The Weakerthans. It ends on a rampaging note to once more reiterate the emo flood that they wanted to drown you in. It's a remarkable record and one I'll be playing for months to come. I can sense it already. Really brilliant stuff here and the bar's set so high, I wonder how they'll top this.