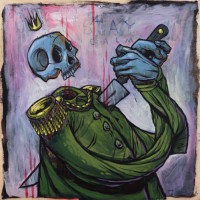 The Shell Corporation have a knack for political yet musically sound records and are one of the bands I'm shocked are so under the radar. They pack some serious punch. With a musical shift from a skate-punk sound to a more distinct melodic-punk vibe, they manage to take Mandrake even further than what I expected, while still splicing in folk-punk, ska and post-hardcore here and there, to really show how much variety they're capable of while holding true to a "stand-for-no-bullshit" narrative.

The overt criticism labeling society is there in spades and as opinionated as the record comes off, their takes on what's degrading the cultural context on a global scale unfold nicely. They hold back on the blatant disparaging remarks a bit but still get their point across effectively and with some snorts of derision. "Appetite for Distraction" relishes the melodic-punk sound they focus more on in this album and the snazzy, crisp kit-work backed by a dearth of "whoa-ohs" show how much they owned up to their high degree of promise, reminiscent of their 2012 split with The Mighty Fine. Their catchy hooks and slick riffs add an anthemic element to their political overtones which enhance "The Death of Us" as a track from a band that's angry but diligent about how they express it.

"Trust Us" and "Maguire's Plea" live up to a faster, more relentless punk sound akin to their older stuff and it builds Mandrake up even more as an album for fans olden, and also, to rope in new listeners. They mix it up perfectly, as seen with the ska-heavy "Even Bob Villa Couldn't Fix This Old House" and the distorted, pop-punkish "Bombs Away." Jan Drees' vocals are very telling and one of the biggest strengths of the band. He's one of the modern frontmen that I think wields an enormous power on the mic that people vastly underrate. He shines brilliantly on this record as the hard-rock, alternative "60 Hours" shows.

As the acoustic "Perfect World", which comes off a la Tigers Jaw meets "Hey, There Delilah" ends the record, touching on warmth, love and acceptance, it's a major pleasure to see how far TSC have come and how much they delivered on their potential. They've refined their music with maturity and still managed to keep their core essence at heart. You can't ask for much more. There's something here for punk fans and the various sub-genres embedded in it.