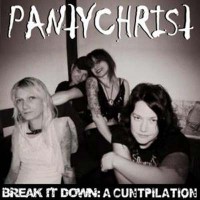 My first exposure to Canada's femme fatales Pantychrist was their Never Love Anything (2005) CD and I managed to catch them live once in 2008. My initial impression of the band was a non-stop blur of short, fast songs with an abundance of attitude but their live set had a bunch of longer tunes that traded in some of the speed for a more metallic crunch. On a visit to their hometown of Hamilton, I saw this in a record store and my curiosity was piqued. Break It Down is a 13-song "cuntpilation" of material from 2004 to 2011 and shows the expansion of the band's sound over the years.

The disc blasts off with the in your face and angry "Bitch" which was recorded in 2011. Vocalist Danyell DeVille spits out the words with a raspy snarl that sounds absolutely incredible. Next was the familiar and raging "Never Love Anything," and super catchy "Peepers." A 2004 demo version of "Carve My Name Into Your Chest" is followed by a really raw version of "Suicide" that is superior to the Never Love Anything original. Halfway through the sixth track (and third from 2011) "Break It Down" it dawned on me that there was definitely a "new" Pantychrist. They always reminded me of other female punk bands like The Devotchkas, Distillers and at times, The Lunachicks., but this song is hard-edged, metallic and pounding with pure screamo vocals. It jumps up and down in tempo and sounds savage. The next newer song to come along, "DNA," has killer hooks and dynamics and the band -- especially DeVille -- sound at the top of their game. I always knew that even at full estrogen stomp, Pantychrist songs were full of catchy vocal melodies, but the most interesting thing about this disc is the variety of the song stylings themselves. Besides their usual bombastic punk onslaught, "Clinically Insane" has a down and dirty New York attitude and right out of the gate "Psychopatho" had me hooked and wanting to sing along. Definitely a highlight, as DeVille unleashes what may be the most interesting vocal performance on the disc. Pantychrist have gone through an assortment of members over the years and she is now the only original member left. When I saw Pantychrist live she was a non-stop blur of energy and attitude and delivered a performance I still regard as one of the best I have seen.

What started out as a curiosity has grown into a regular playlist feature. While Break It Down may have been originally looked on as the band's epitaph due to outside events, it is instead a taste of the future of Pantychrist. From the surprising diversity and strength of the latter day material and with DeVille back in action, I'm looking forwards to the band's next output.