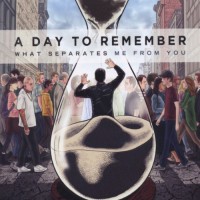 The success of A Day To Remember's new album, Common Courtesy, is an interesting reflection of the music industry's current state. Following a lengthy battle with Victory Records, the band dropped their new album without the backing of a label. Common Courtesy was successful financially, adding to the notion that being signed to a label is not a necessary precursor to success. ADTR's zealous fan base obviously supports the record, but should others?

The band's fifth full-length album is top heavy, opening with three of its most memorable songs. The opener, "City of Ocala," is cookie-cutter popcore, but too damn catchy not to listen to at least a handful of times before moving on. The album's first track also acts as a warm tribute to their hometown. Its second number, "Right Back At It Again," features a driving rhythm that eventually gives way to a massive chorus, a formula present in previous singles "Downfall of Us All" and "All Signs Point to Lauderdale."

Track three, "Sometimes You're the Hammer, Sometimes You're The Nail" delivers some of the albums best lyrics. The angst the band felt during its intense grudge match with Victory Records is present in the lines "I want to be a better person. I want to know the master plan. Cast your stones, pass your judgment. You make me who I am." The moment is one of the album's best.

After the first three tracks, Common Courtesy bounces between pop-punk and metal core ultimately never establishing an identity. This characteristic is a gift and a curse. For one, the album's versatility appeals to a variety of tastes. You want something a little poppy? Have a listen to "Leave All The Lights On" or "Good Things." Is something a little rough around the edges more of your flavor? Go ahead and give "Violence (Enough is Enough) or "Life Lessons Learned the Hard Way" a try. This irregularity can also be annoying, as the listener of Common Courtesy often finds themselves settling into a particular sound before being undergoing a serious change in pace.

Overall the balance of Common Courtesy is probably one of its strongest points. Apart form the aforementioned songs, ADTR effortlessly slows the tempo with the touching acoustic tune "I'm Already Gone" while dropping its once-per-album rock ballad "I Surrender." Their fifth full-length album is complex, a characteristic of a band that often bends boundaries pop-punk and metalcore. It's tough to pigeonholed A Day To Remember, and Common Courtesy reminds us why.

Is ADTR's newest work dramatically different than what it has done in the past? Not really. It is, however, an unapologetic, heavy hitting production that deservers to be considered among the top rock albums of 2013. This reviewer gives it four stars based solely on content, and an extra half star because it spits in the face of Victory Records.