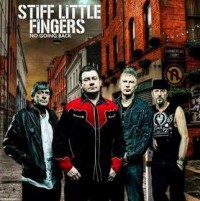 There has been much talk of a new Stiff Little Fingers album during the past seven years and after not being happy with their dealings with potential labels, the band eventually took matters into their own hands and decided upon asking fans to fund the recording and production of their first new album in over a decade. Using PledgeMusic the target was reached within 12 hours, showing that even after 35 years the band still has a loyal fan base eager to hear new material and willing to do something about it.

The result of that fervour is now here via the initial download released to those that pledged and it has to be said that it's a very good album indeed. Now then, I will fess up here and say that Stiff Little Fingers are my favourite band and have been for over thirty years during which they've provided me with more than any other artist in terms of enjoyment etc. and yes, I pledged cold hard cash on day one to help get the project off the ground but this review is still written with a degree of objectivity â there are no scales over my eyes, or ears!

A number of these tracks have featured in live shows over the past few years and it's two of these which kick off No Going Back. First is "Liars Club" a song Jake Burns wrote about politicians and second is "My Dark Places", a poignant track which deals with the Burns' battle with a depression; a song which has struck a chord with many of the band's fans on hearing it performed live. What is evident from "Liars Club" is that although musically the band might not have that musical edge from the early days, Burns and Co. (for the record the "Co." is original bassist Ali McMordie, and the long standing pair of drummer Steve Grantley and guitarist Ian McCallum) still have a fire beating within them which needs to address what they see as being wrong in the world these days â so really, it's the same as when they started but delivered in a slightly different way, all of which remains Stiff Little Fingers to the core.

The album features the distinctive guitar playing of Burns and it's always a delight to hear his work, with trademark punchy riffs and chords to drive songs like "One Man Island", "Good Luck With That" and "Trail Of Tears" along with ease. Beyond Burns' contribution one other moment that stands out for me and that is McMordie's bass on "Full Steam Backwards" which gloriously propels the song from start to finish, underpinning Burn's spirited vocal performance as it goes. It has to be said that as good as Bruce Foxton was in the band, no-one can hold a candle to McMordie when it comes to laying down bass lines â his return to the band seems to have had a massive impact. Despite the members of the band being long in the tooth there is no lack of passion throughout this album with targets being the banking institutions, selfishness and record labels/managers amongst others, each one deservedly chosen.

Closing with "When We Were Young" there's a moment, when in the background, a snippet of the band's biggest U.K. chart âhit', "At The Edge" can be heard, linking nicely with the theme of the new song in that we should never let people tell us what we can and can't achieve. Even in middle age (and beyond) we should be able to identify what we want and to go for it.

I've not been able to find a fault with this album and believe me I've listened to it many times since I first got the download two days ago â it takes all the strengths of the last five albums and pools them into probably the best long player the band has released since reforming in the late 1980's. It's no Inflammable Material or Nobody's Heroes but then those records are genuine classics from a different time and No Going Back shouldn't be judged against them.

For anyone thinking this is a band that has passed its expiry date then No Going Back is evidence that there is still life left in Stiff Little Fingers. Anyone who has witnessed the band live in the past twelve months can testify to that fact â I saw them play on consecutive nights in March last year and they were some of the liveliest and exciting shows I've seen in years, a sentiment echoed by many fans on that tour. Roll on 31st March 2014 when I get to see them again for the forty first time.

Anyone who has been a fan since the band reformed in the late 1980's will appreciate this release as it's a strong blend of the five albums they've released since then. However, those fans that cannot get past the first two albums the band released need to get their heads checked because they're missing out as it's an excellent piece of work.

The physical release is initially being managed via the PledgeMusic campaign (still time to join in and a % of anything pledged now goes to the Integrated Education Fund, a charity in Northern Ireland which aims to support the growth of integrated schools which cross cultural and religious barriers) with the band due to sell copies on their upcoming UK tour.

Note: The band released the album to pledgemusic supporters, but is still not available to the general public. More info here.