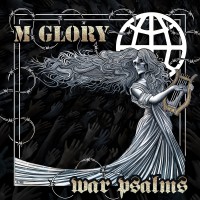 The reason why Ezra Kire succeeds in his projects is because he's not afraid to go big. For some reason, modern punk has developed the implied directive that "you're not special." A band can't act too excited when they get in stage. Rocking out (instead of kind if just standing around) is considered cheesy. Even when a band releases an album, the usual demeanor is something along the lines of "we think it's pretty goodâ¦" By contrast, Kire, who is probably about a decade older than most of the bands that he shares the bill with, is sort of the last generation of the old school: An album is an important statement that defines the artist. The live show should be a goddam rock show with huge guitars and more energy.

The last Morning Glory album, Poets were my Heroes, the bands first full length in over a decade, shot for the moon. A huge, double LP with orchestras, piano interludes, and a narrative about overcoming drug addiction, the album was meant to be a massive statement. While that could have easily disintegrated into bathos, instead, Poets was pretty much a modern masterpiece. Why? First, because Kire seemed entirely genuine- the album's statements might have been huge, but they came from a guy with huge emotions. Second, Kire and crew are frickin' talented. Poets, as massive as it was, succeeded because the band didn't second guess themselves and because they had the nerve to create a mammoth of an album.

How do you follow that up? You could do another massive album, but before you know it, you become Emerson, lake, and Palmer, constantly trying to out-advance your previous releases. Instead, on their third LP, War Psalms, Morning Glory pare their sound down into a harder, shorter, tighter album. Yet, despite that it is more compact than its predecessor, with the fat trimmed away, it sounds and feels just as huge.

Why? Well, first of all, because Kire is a frickin' riff machine that writes hooks that are as big as Priest but are as hard as the Cro-Mags. This is an album that rocks. But, those riffs are just the door. Beneath the smashing, pounding rhythms are focused commentaries. While the previous MG releases were introspective on Kire's own life, War Psalms looks outward to global issues.

By toning down the piano and horns a bit (in comparison to Poets), Morning Glory have written an album that is fairly reminiscent of i>The Whole World's Watching days in terms of the riffs. Ezra more than delivered when he said "People who like earlier M-glory are definitely gonna like it. It's faster, heavier, and more raw and stripped down than Poets, but retains that anthemic Morning Glory message." And I would have to agree. The Morning Glory message is very prevalent in the lyrics of War Pslams, but they are definitely more worldly while at the same time being questioning instead of being self-reflective.

Morning Glory has always waivered between the introspective side and broadly political statements. In some ways, personal experiences are easier to write about because each person's experiences are unique. By contrast, broad politic anthems, like "Machine Gun" (which has that Billy Joel aping Ma-ma-ma-ma-machine gun that rules) have been stated in some form or enough since Woodie Guthrie, so it's a challenge to ay something new, and moreso, something big. And that's where Kire and crew succeed.

They go for it in sound and substance. There's a trend in punk to keep things small (perhaps not to appear as rockstar?) but Kire goes for the Clash angle here- big riifs, big choruses. "War Dance" exemplifies where these challenges take off. Big, rumbling riffs, metaphysical musings, and the sampled sounds of futuristic machines. It could have been cheesy, but because Kire delivers the lines so directly and with such conviction, they pack a wallop. Likewise, the (Conflict referencing?) of "Standard Issue" features the band doing what few artists can pull off- it's a bright, positive sounding sound set amidst a backdrop of destruction and defeat. And of course, it rocks.

Lyrics in "Standard Issue" and "I Want Control" question just how genuine the punk scene is today, which a bold move on their part. But this is the band to do that and this is absolutely the album to do that on. M-Glory took a risk by being unique and going for the bigger sound. It was a gamble that paid off immensely. I guess it always pays to go your own way, which has always been one of the band's main messages to begin with.